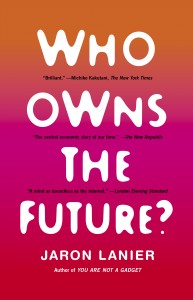 What if the promise of technology, to make our lives better, simpler, and more fulfilling, was a sham? What if the proliferation of technology destroyed the fabric of our society instead of improving it? In the book Who Owns the Future, Jaron Lanier examines the evolution of technology and how the current path of development is concentrating wealth and power in the hands of a few select companies and individuals. His  contrarian viewpoint is eye opening, and the solution he proposes to move us to an alternate, more equitable path for society, makes for an interesting read.

The book can be broken into two parts. In the first part, Lanier shows how the dominant market leaders are making profits from our personal information without compensating us. His contention is that these dominant market leaders, or siren servers, have cornered their market and squeezed out the competition. It has allowed them to force people into their ecosystem where they are compelled to give these dominant market leaders more and more of their personal information for free. Examples are Google in search, Facebook in social media, and Amazon in internet retailing. Lanier builds upon his point to eventually show how the lack of compensation to people for sharing their personal information will eventually destroy our economy. It’s a bit of an extreme viewpoint, but it’s necessary so he can expose why it is so important for us to own and control our personal information and online data. In other words, we shouldn’t be permitting third parties like Facebook to dictate the terms by which and with whom are personal data is shared. We should control it.

In the second part of the book, Lanier proposes a solution to how the economy could evolve to give people ownership of their data and force companies to make micropayments to individuals for using it. It’s an interesting concept that seems difficult, if not impossible to pull off – especially given that the genie is out of the bottle, and forcing companies to pay for information that they’re used to receiving for free would be a tough pill for them to swallow. Lanier acknowledges these challenges and tries to address them in his solution, but it appeared to me that his solution is still being baked and hasn’t been fully vetted or tested yet.

Overall, the book was interesting, but it was a tough read through the first half. It feels repetitive as Lanier continually emphasizes his point that having dominant market leaders, or siren servers, is bad for the economy and future of society. While I understand that he wanted to build his case and sense of urgency for the reader, it felt like he could have gotten to his solution much faster.

I wouldn’t put Who Owns the Future in my Must Reads. It’s worth reading, particularly if you are in the technology sector and are interested in the challenges facing a technologically advanced society. There are a number of interesting concepts in the book that I wouldn’t be surprised to see end up as startup companies. In fact, it wouldn’t surprise me if one day we are able to control and own our personal metadata, and possibly even make some incremental revenue off of it. Whether or not it will happen in my lifetime is a debate for another time.

1 thought on “Book review: Who Owns the Future”