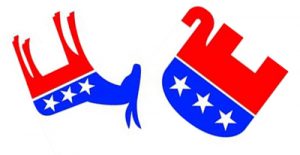 The 1992 election was the first presidential election that I voted in. That makes the 2016 election my seventh presidential election and, by far, the worst of the lot. A process that uses a system of primaries to narrow the field of candidates down to the two who are deemed most fit to serve as the President has failed us.

Before I continue, this post is not about any one candidate, as both candidates this year had their flaws. It is about the system. The system that we’ve put our faith in. The system that is supposed to put forward the two most highly qualified candidates for us to choose between.

How has the two party system failed us?

First, the presidential election is a process that should unite us as a nation. It is supposed to be a celebration of our democracy. It demonstrates how we embrace diverse views and opinions. It shows how we engage in constructive dialog over the pressing issues that face us as a nation.

This election cycle did neither. There wasn’t healthy debate about any of the substantive challenges that our countries faces. If you were to ask me where candidates stood on various issues, I could only give you vague answers such as the desire to make America safe, the need to create jobs, making healthcare affordable, unifying the country. Yes, these are great statements to make, but these statements lack substance. I can make these statements, and it certainly doesn’t qualify me to be president.

Therefore, instead of uniting us, this election cycle divided us. As the old adage goes, “united we stand, divided we fall.” Currently, we are a nation that is deeply divided. It makes us vulnerable. If we cannot heal our internal divisions, how do we provide a united front to the rest of the world? Especially to those countries and organizations that want to do harm, or destroy us?

Second, I would contend that the two candidates selected were not the best choices. If so, we have much bigger issues than our two party system. Now, I’m not saying that our politicians are going to be perfect people. Seth Godin is right when he recently wrote “there has never been a perfect leader.” I agree that our leaders will have faults. They will not be perfect. They will contradict themselves. But the outright deception, corruption, and character flaws on display during this election cycle reached a new level. It is even more disturbing that the behaviors of the candidates were rationalized by their supporters (and the media in some cases).

I disagree that we should be choosing our leaders by the process of ‘this one isn’t as bad as the other one’. I’d prefer that we are making a choice between the better of two respectable, highly qualified candidates rather than the ‘lesser of two evils.’ When the latter is the basis of our decision making process, then the system has failed.

So where do we go from here? That’s a tough question. The Republican and Democratic parties are extremely powerful. I don’t see how either of these parties will be upended anytime soon. However, there are some tweaks we could make so the system is more inclusive. Here are a couple of suggestion that I have.

For starters, it’s time to embrace more than two parties. I’m not sure why there is such an aversion to allow third parties to flourish, except that is in the best of the interest of the two parties currently in power. Currently, no matter who runs, the winner will either be a Deomcrat or Republican, ensuring that the leaders, people and companies bankrolling them will win. It’s a system that favors the status quo. It has effectively turned our government from a democracy into an oligarchy (which I’ll cover in a separate post). I don’t have a problem if our eventual choice is between two candidates, but let’s at least give more than two people, or parties,  a chance in front of the entire electorate.

One way to make the process more inclusive would be making changes to the selection criteria for the Presidential debates that are set by the Commission on Presidential Debates. The rules for this year were as follows (taken directly from their website):

Under the 2016 criteria, in addition to being Constitutionally eligible, candidates must appear on a sufficient number of state ballots to have a mathematical chance of winning a majority vote in the Electoral College, and have a level of support of at least 15% of the national electorate as determined by five selected national public opinion polling organizations, using the average of those organizations’ most recently publicly-reported results at the time of the determination. The polls to be relied upon will be selected based on the quality of the methodology employed, the reputation of the polling organizations and the frequency of the polling conducted. CPD will identify the selected polling organizations well in advance of the time the criteria are applied.

The major change I would make is to eliminate the 15% polling requirement. How is a candidate supposed to poll at that rate when they are not given a chance to participate. Maybe they could enforce such a rule for the finale of a series of debates, but having it at the beginning of the process smacks of a system that is limited to those with privilege. On the other hand, I like the idea of making candidates do the work to appear on the ballot. In fact, I would require that candidates have to appear on the ballot of at least 40 states, if not all 50. Given this is not an insignificant amount of work, it would only include those who are serious candidates.

By the way, if you disagree that name recognition is important, look at how a couple of third party candidates faired this past election. Gary Johnson, former governor of New Mexico, took 9% of the popular vote in his home state. Even more amazing, independent candidate Evan McMullin from Utah took 21% of that state’s vote, which was only seven percentage points behind Hillary Clinton in Utah. Like me, you’re probably asking who is Evan McMullin? I don’t know, but he obviously made his name known in Utah, and it mattered in the vote. (See here for a complete breakdown of results from each state)

My last suggestion is a little outlandish, but I’ll make it anyway. Have a run-off election. The way it would work is that the general election would be held on the normal election day. If no one candidate secures more than 50% of the vote, then the top two candidates would participate in a run-off election. The winner of the run-off would become president. In this scenario, the candidate selected is the one who represents the majority of the country, and the dilution of the vote among too many candidates would be reduced, or eliminated. I get that there would be many logistical challenges with such a system, but it may be worth it if we are choosing the person who is going to be the leader of our country.

I wanted to get this post out before the election but wasn’t able to get it done. Given the results and the ensuing reactions, I’m glad I waited. It has only reinforced my opinion that the recent election further divided us rather than united us. I can only hope that people will put aside their differences, sooner rather than later, and come together to support our elected officials. Getting involved and making a difference over the next four years is the way forward, not protesting the results of an election process that is behind us.