When someone mentions San Francisco, what comes to mind? I’m sure you think of The Golden Gate Bridge, cable cars, Fisherman’s Wharf, Coit Tower, Alcatraz Island, and Chinatown. One item missing from that list that might surprise you is hiking.

I visited the city twice this past summer and was amazed at the number and quality of the hikes that are so easily accessible from right inside the city. I’m going to put together a few posts documenting the hikes starting with Lands End.

I would categorize the Lands End Hike as a moderately strenuous hike. Depending on where you start, the side trails you explore, and the distance you choose to go, the hike can be anywhere from 2.5 to 7 miles. There can also be a fair amount of walking up and down hills of a moderate incline, although the majority of these will have steps cut into the hillsides, which makes it easier to navigate.

The route I took was a bit circuitous. We parked just south of Golden Gate Park on Lincoln Way between 42nd and 46th street. There are parking lots much closer, but it was late morning on a weekend, and I figured it would be difficult to find parking there, which I was right about. Something tells me it’s much easier to find parking there during the week or off-peak periods.

Based on the Google Maps routes below, the total distance covered was just over 5 miles, but this doesn’t include the following side excursions: Sutro Baths, Lands End Labyrinth, and Mile Rock Beach. Those side excursions will add almost 2 miles to the trip along with significant elevation changes going from the trail down to the beach.

However, the longer route allowed me to see a few additional landmarks that you won’t see if you take one of the shorter routes. Here’s a an overview of the different things that you’ll see along this extended route: 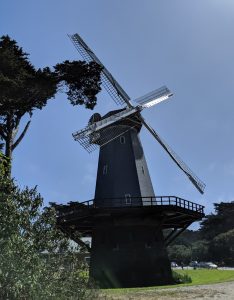 The first landmarks you’ll see are the Dutch Windmill and Murphy Windmill along the western edge of Golden Gate Park. These windmills were built in the early 1900’s and were originally used to pump groundwater to irrigate the park. The windmills are no longer operating but have been preserved as historical landmarks.

As you leave Golden Gate Park and head up the hill, you’ll pass the Cliff House. The original Cliff House was built in 1863. It has quite a history which you can read about here. Today, it is part of the Golden Gate National Recreation Area and houses numerous restaurants.

As you round the corner from the Cliff House, you’ll see the remains of the Sutro Baths at the bottom of the hill. The Sutro Baths were built in 1896 and served as a swimming and recreation area for many years. The business was unsuccessful, sold to developers in the 1960’s, and eventually became part of the Golden Gate National Recreation Area in 1973. You can read the complete history here. It’s an interesting place to explore, almost like walking among the ancient ruins in Rome or Athens. 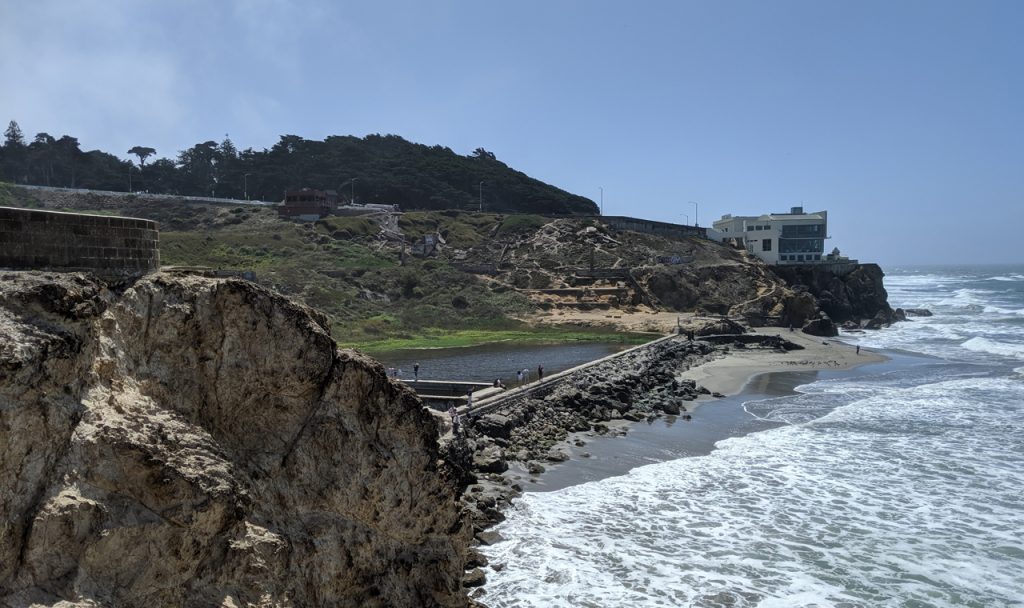 You’ll want to catch a couple of pictures from the Lookout looking across the Bay and back towards Golden Gate. It was a nice day on my hike, but I bet there are many days when you can’t even see across the Bay, let alone back to the bridge, due to the fog. 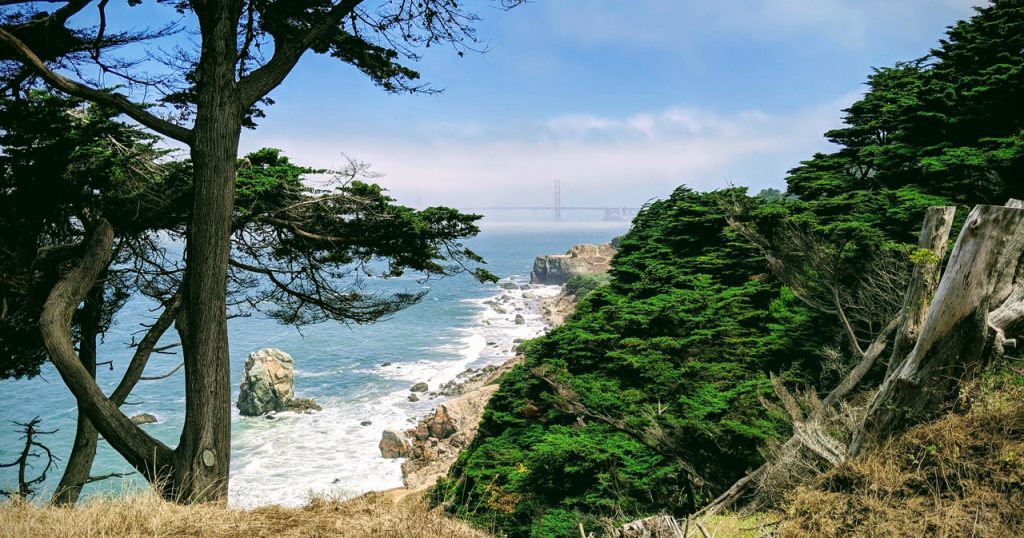 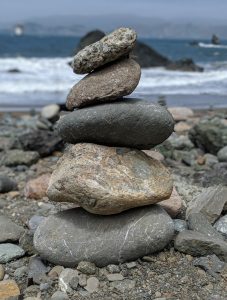 Another detour off the main trail will take you to Lands End Labyrinth, which is an interesting circular maze made out of rocks on the bluffs above the ocean. From there, you can walk down to Mile Rock Beach. It’s another worthwhile detour, but beware that it does require taking a lot of stairs down, and then taking them back up. Once down on the beach you’ll find many stacked rock formations, some which will impress you with both their height and artistry.

After you exit the trailhead for Lands End, another interesting detour is to check out the Lincoln Steps at the end of California Street. Yes, they’re just a set of steps but not an ordinary set of steps. They have been tiled to create a beautiful mosaic when viewed from a distance. The attention to detail, the quality, and the artistry is all very impressive. It’s a nice break in the hike before walking down the hill to Golden Gate Park. 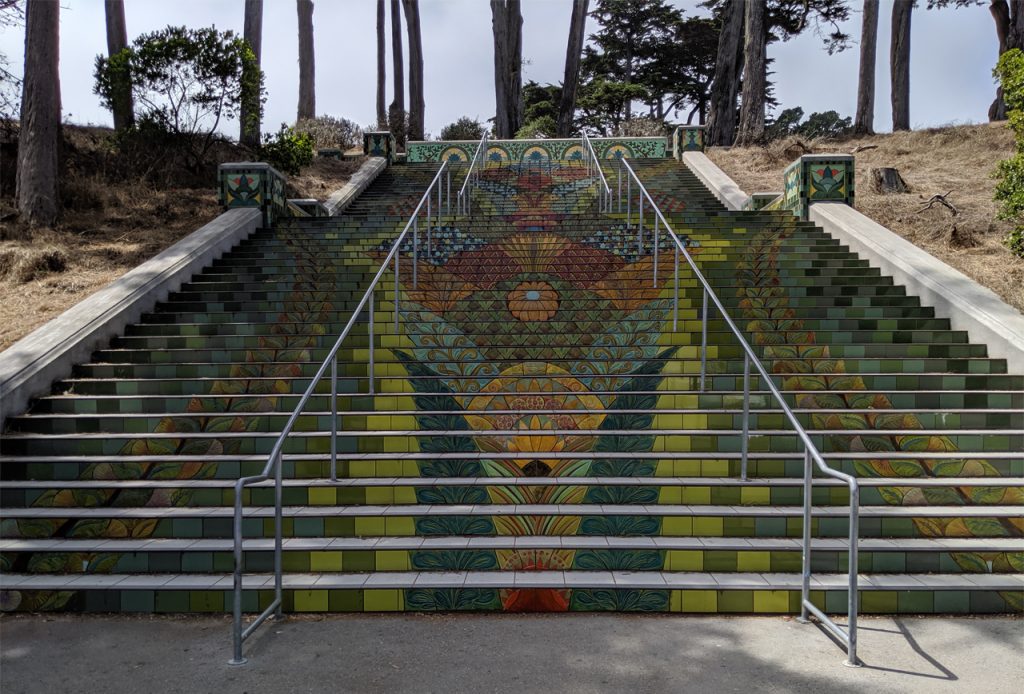 As you walk into Golden Gate Park from 34th Avenue, you’ll encounter Spreckels Lake. At first blush, it looks like an ordinary lake in the middle of a park until you notice the remote controlled model boats and yachts floating along in the water. It’ll have you doing a double take until you realize it’s home to the San Francisco Model Yacht Club.

Overall, the hike, including the side excursions was just over 7 miles. I would allocate around 4 hours for the hike to account for breaks and photo opportunities. I would also recommend wearing comfortable close-toed shoes, dressing in layers as the weather can be unpredictable along the coast, applying sunscreen just in case the fog burns off, and bringing plenty of water.