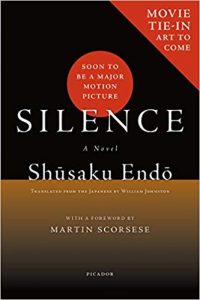 How would you respond if someone asked you what you believe in? What if they asked you why you believe it? If they questioned your answers, how far would you be willing to go to defend your beliefs? Would you give up your freedom? If you were persecuted, tortured, or sentenced to death, would you maintain or abandon your faith?

These are the questions that author Shusaku Endo explores in Silence. He portrays the lives of two Portuguese Jesuit priests who travel to Japan in the 17th century during the height of Japan’s persecution of Christians. They go there in search of their former mentor, who they fear has apostacized, or renounced his belief in the Christian faith.

While the book is a fictional portrayal of events that could (or may) have happened in 17th century Japan, the persecution of Christians during that time frame is not. Portuguese Jesuit priests arrived in Japan during the latter parts of the 16th century to setup missions and spread the word of the Gospel. After early success spreading Christianity throughout the country, fortunes turned in the early 17th century when Tokugawa Ieyasu assumed power over Japan in 1600. He disliked foreign influence in Japan’s affairs and began systematic persecution of Christians shortly thereafter. By the middle of the 17th century, the open practice of Christianity had been eliminated across the county with the expulsion of European missionaries and execution of converts. A more complete history is available on Wikipedia.

What Endo explores in his book is the reaction of the two priests who arrive in Japan at the height of the persecution of Christians. They have come from a place where their faith is woven into the fabric of every day life, supported by society, and promoted by the government. They are placed in a situation where their beliefs are not accepted, and open practice of their beliefs leads to death, often through tortuous means. It is here that Endo explores what the priests believed, why they believed it, and how far they were willing to go to defend their belief. It may be that Endo wrote this in order to come to grips with questions regarding his own faith.

I wouldn’t put Silence in my Must Reads or Fun Reads category of books, but I would definitely recommend it. Much like Return to Love, it is not going to be a light read. You will need to put yourself in the right frame of mind and prepare yourself to be challenged. If you do, it could have a significant impact on how you view life and your beliefs. It certainly made an impact on my approach to both areas.

By the way, the book was made into a movie by noted director Martin Scorcese in 2016. Since I haven’t watched the movie, I can’t speak to the accuracy of the movie to the book, but here’s the trailer in case you’re interested. It will also give you a little more insight into the subject matter of the book. And one last thing, the book is one of the few you can’t read on a Kindle. There was a certain nostalgic feeling about holding an old-school paperback and having to physically turn the pages.

I’d like to give a h/t to Eric Pointer for recommending the book – thanks!