In 2015, I set four main fitness goals around working out, walking, physical activity, and diet. I’ll get into the details below, but it was a great year as far as goals were concerned. In fact, it went so well, that I’m not planning to make too many changes in 2016. Here’s a look at the results from last year and the goals for 2016.

The goal for 2015 was to make it to the gym 175 days. I succeeded and got there 186 days. I also decided to mix-up my cardio routine and started spinning once a week at the end of February. It’s a class taught by my good friend Danny Stymacher, which makes it a lot of fun, too!

The goal for 2015 was 700 miles split into four 175 mile segments. I completed each segment with room to spare, and ended up walking over 750 miles for the year, nearly all of them with my trusted Golden Retriever in tow, although I’ll admit that he may have walked me a few times. I’ve attached the profile for the year and records I kept in RunKeeper below. 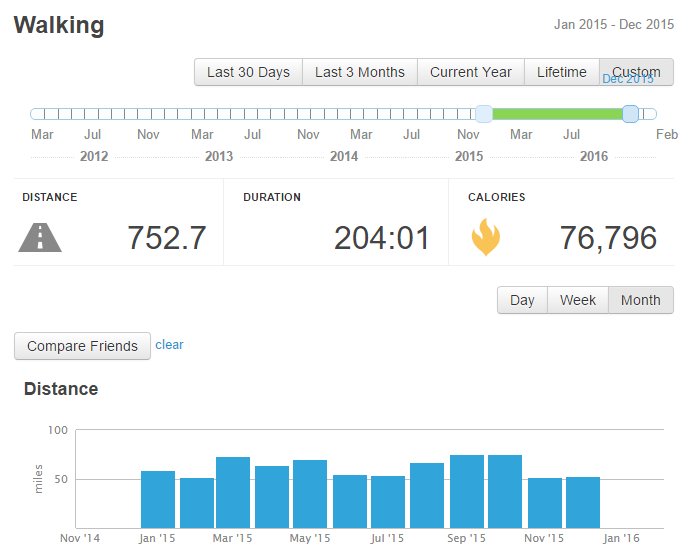 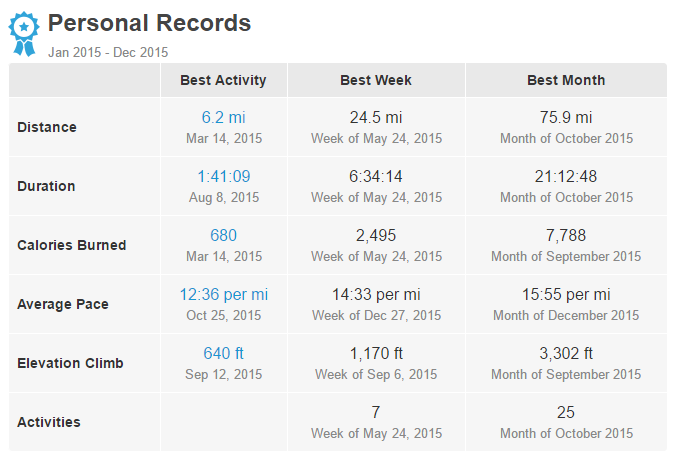 I wanted to log over 1,000 miles of activity in 2015, which included walking, cycling, running and hiking. It was going to be close, so I convinced my daughter Amanda to take a second ride on the Marvin Braude trail during the week between Christmas and New Year’s. The 40 miles we covered put me just over 1,000 for the year.

I also logged almost 40 miles running in preparation for a 10K that I completed at the beginning of December. It was the first time I had ever done serious running, and it was the first 10K I had ever trained for, and quite possibly my last. 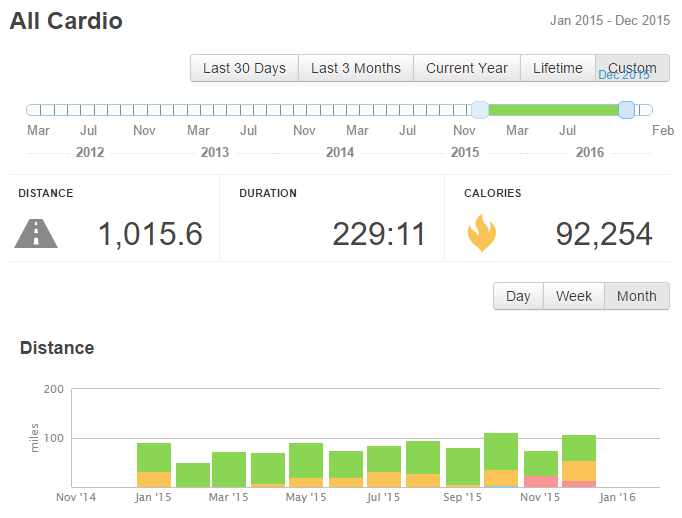 I entered 2015 right around 165lb. My goal for 2015 wasn’t just to eat better, but to cut out as much added sugar as possible. I didn’t cut everything out, and I’ll admit to eating the occasional cookie or piece of apple pie (hard to resist when they’re home made), but I got pretty aggressive everywhere else. I cut out breakfast cereals with added sugar, cut out store bought orange juice, started making home made tomato sauce, and became very aware of food ingredients by reading a lot, and I mean a lot, of food labels. You’d be surprised at just how many processed food products have some kind of added sweetener in them.

It helped, a lot. I’m going to document it in a separate post, but the quick summary is that it was much easier to control my appetite and hunger. I also coupled it with better control of my food portions. The results took a couple of months to take hold, but since around March/April, I’ve been hovering right around 160lbs, which I consider my “fighting weight”. Now my challenge is to maintain that weight. I have some ideas for 2016 that I’ve documented below.

I’m also happy with 175 miles every three months, which equates to 700 for the year.

This is a tough one. I don’t expect that I’m going to break 1,000 for this year. My daughter refuses to cycle until we upgrade our bikes. I’m not planning another 10K for this year. So, I’m going to drop this one for now, but I want to document it in case I decide to pick this one up again in 2017.

Cutting out sugar in 2015 was a great thing, and one that I’m going to continue for the next year. It’s become part of my routine, so I’m not planning to fall off this wagon. Staying away from sugar alone should allow me to maintain my fighting weight of 160lbs.

The big diet goal for this year is to eat fresher foods and cut down on the grains. I have a couple of books on my reading list, Wheat Belly and Grain Brain, that should give me the motivation to cut down my bread consumption. It’s going to be hard, because I like bread, a lot. On the other hand, I’ve been told that the science behind the grains will make me want to stop. We’ll see.