For 2016 I had three main fitness goals around working out, walking and diet. I’m pretty pleased at how I did for the year, but there is always room for improvement. For 2017, I’m not planning any major changes in my routine, just some refinements. I’m also going to put a stretch goal or two in place to challenge myself a bit more.

Here’s a more detailed look at the results of 2016 and my goals for the next year.

I had a goal of getting to the gym 175 days in 2016, with a stretch goal of 200. I end up making it 196 days, just 4 shy of my stretch goal. Quite honestly, I forgot that I had set a stretch goal. If I had remembered, I might have made more of a push the last week of the year. Instead, I got a little lazy.

My 196 days were split among the following activities:

I’ve found a good rhythm at the gym where I spin in my friend Danny’s class once a week, hit the stairs once a week for a good cardio workout, and do an all body workout on Fridays. I leave Monday and Wednesday for doing weights. I’m planning more of the same for next year.

My goal for 2016 was to get in 700 miles. I broke it down into four, 3 month segments of 175 miles each. I completed each segment and amassed almost 740 miles for the year. It was a little tougher than 2015 because I had to leave my furry companion behind for quite a few walks during the second half of the year. Our dog is struggling with a weight issue, so I decided it was best to leave him home occasionally. Of course, without my companion, I didn’t walk quite as much, or quite as far. 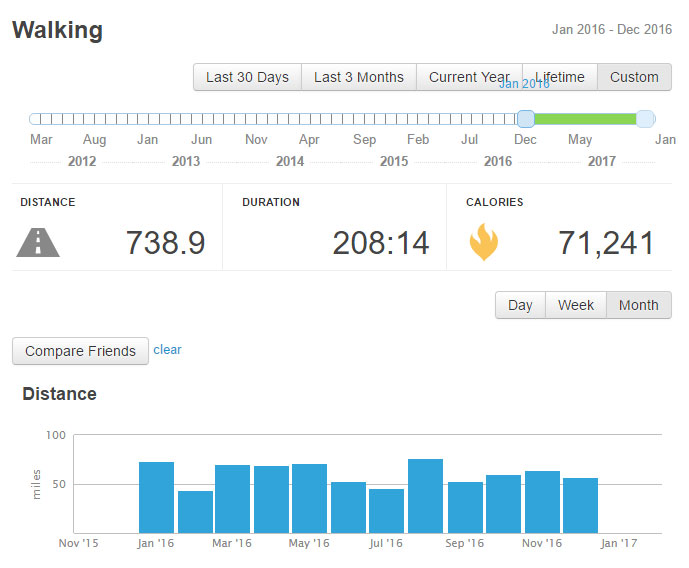 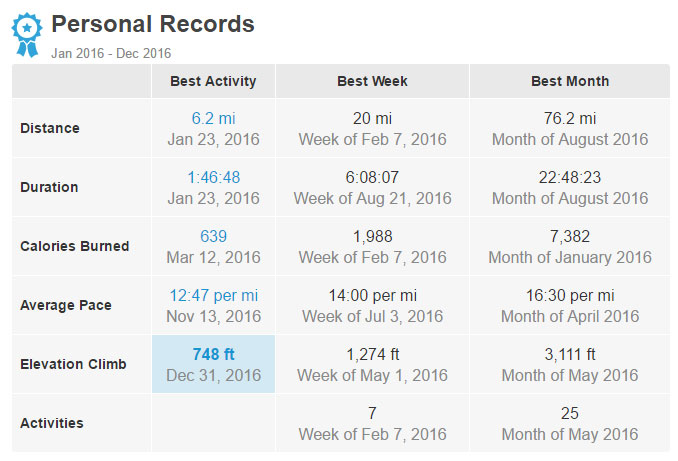 In 2015, I made the conscience decision to cut back significantly on sugar. My efforts helped me to shed 5 pounds and enter 2016 at my “fighting” weight of 160 lbs. I kept up my efforts to reduce my sugar intake throughout this past year. I did pretty good, with the exception of dark chocolate. I really enjoy chocolate, and I probably have two squares 3-4 nights a week. I stick to the 70% or more cocoa, so the sugar content is fairly low. My favorites are 85-90% cocoa, which have an even lower sugar content.

My big diet change this past year was giving up grains in March. By June, I had dropped another 3-5 pounds and spent the second half of the year in the 155-157 pound range. I didn’t give up bread to lose weight, it was just a side effect of gaining better control of my appetite. Outside of the occasional pasta dinner, which we are doing homemade these days, there is very little, if any, wheat in my diet.

Another habit I started toward the end of the year is intermittent fasting on a more conscious basis. I typically don’t eat anything after 9 in the evening and don’t eat until lunch the following day. I thought giving up breakfast would be very difficult, but surprisingly, it hasn’t. I don’t find myself that hungry in the morning. Well, there are occasions where I do get a little hungry late morning. Typically, a handful of nuts and/or piece of fruit will hold me over to lunch.

I’m enjoying the new eating habits. I got a little lazy over the holidays, so the weight has spiked back up to close to 160 pounds. I suspect that number will move closer to 155 as we get further into the new year.

I set a stretch goal to reach 1,000 miles of activity in 2016. I didn’t expect to make it, and I wasn’t really focused on trying either. Outside of my walking, I didn’t do any other outdoor activities. I’d still like to do more cycling. I just need to get a true road bike, and then convince either Lisa or Amanda to get one so I have a riding companion.

I’m going to up the number a touch from the past two years. My goal is 182 days for the year, or about 50% of the year. My stretch goal remains 200, which I’m going to be more focused on achieving in 2017. I plan to continue recording the activity types, but I’m not going to track goals for the individual activities.

My diet is pretty dialed in at this point. I plan on continuing my reduced sugar intake and abstaining from bread. I’m still going to indulge occasionally on homemade pasta and a slice of pizza here and there, but that’s it. My eating plans for 2017 can be more or less summarized in this post on eating from the Mr. Money Mustache blog – The Amazing Waist-Slimming, Wallet-Fattening Nutrient.

One thing I would like to try to do in 2017, at least once, is a 48 hour fast. I’ve heard good things about letting your body “reset” itself. I’m pretty comfortable doing 16 hours, but I’m not sure how I’d fare over 2 days. There’s only one way to find out.

I don’t have any weight goals for 2017 as I believe weight is an outcome of eating properly. Working out helps, but I’ve found diet to be the key. Trying to lose weight by only working out is like playing basketball without a ball. Sure, you’re still playing the game, but you need the ball to score points. Likewise, working out helps to keep you in shape, but your eating habits are what really influences your weight. Anyway, I got on the scale this morning and was just shy of 160 pounds. The goal is to stay in the 155-160 range for the year.

As with last year, I’m not going to set any goals for activity. Until I get a proper road bike, racking up miles outside of walking isn’t likely to happen.

I maintained the momentum I established in 2015 through 2016. I’m looking to do more of the same in 2017 and further solidify the fitness and diet habits I’ve established.