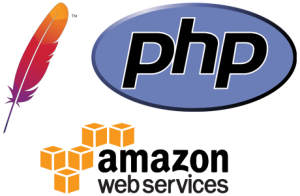 I launched my first Amazon instance in the middle of 2014. At the time, I installed the latest web server technology – PHP 5.3 and Apache 2.2. Since technology never stops moving forward, especially software, I figured it was time to move to newer PHP and Apache versions. In my case, I chose PHP 5.6 and Apache 2.4. Here are the steps I followed for the upgrade.

There were two posts that I used as reference for performing the upgrade:
StackOverflow – How to Install Php5.6 in amazon linux
Brian’s Tips and Tricks for Web Developers – Update Your Amazon AMI from PHP5.3 to PHP5.4 or Higher

Both posts served as the basis for the process that I followed below.

Preparing for the upgrade

The first thing I did was snapshot the OS and data volumes I was using for the instance. Just in case things went sideways, I wanted to be able to recover the machine state and start over. I followed the Amazon instructions for creating a snapshot.

To complete the snapshots, I did the following:

Next, I made a copy of the vhosts.conf file just in case it got blown away during the upgrade. I wanted to be able to restore it without having to do it from memory. I’d also recommend making a copy of any other config files, like httpd.conf and phpMyAdmin.conf, in case there are customizations in these files that you want to reference later.

And now, it is time to start the upgrade. At this point, you will be taking your web server offline. Here we go.

During the removal process, it’s a good idea to copy the names of the packages that were installed prior to installing the new versions, just in case something doesn’t work after the upgrade. Then you can see if it is related to a package that was not installed.

For example, here was a list of packages that were uninstalled from the instance while removing the current (old) version of Apache:

You’ll need to refer back to the list(s) that you create after the new Apache and PHP versions are installed to make certain all of the previous packages get reinstalled.

After the installation completes, you can check the PHP modules installed against the list you saved during the removal process above by running the following:

Before installing any missing modules, I checked the missing modules against the modules that were available in the latest version of PHP by running the following command:

I matched up the missing modules between the php56 list and those previously installed and issued the command:

You can run the command for each module that needs installed. Alternatively, you can do it once by listing all of the packages that you want to install on the same command line separated by a space.

At this point, you are almost ready to restart the web server. Before issuing the start command, make sure that the values from the old configuration files, especially vhosts.conf and phpMyAdmin.conf, have been moved into the new configuration files. You should also check the values in the httpd.conf file, although you should inspect these values carefully. There have been changes from Apache 2.2 to Apache 2.4, and you’ll want to tune your setting based on the performance of your server running Apache 2.4.

(I’m not going to get into tuning performance on an Apache web server as that is a complex topic that would need to be covered in separate post(s). If you’re in need of guidance on tuning Apache, I’ve included a few links below that helped me.)

Now that you’re configuration files are set, it’s time to restart the services.

To be certain that you are running the latest versions, run the following:

You should see the following output for PHP:

and the following for Apache:

Your websites should be back up and running. If not, it’s most likely related to either missing packages or incorrect configuration values. Be certain you do a thorough check of the packages that were installed prior to the upgrade and after the upgrade. Also make sure to check the values in your configuration files before and after.

In my case, I had additional complications because my server and website data was on a separate disk than the OS files. Upon upgrading, all of the server data was put back on the OS disk. I had to do some housekeeping to move data from the OS disk to my data volume. I also had to reconfigure the symlinks that had been removed as part of the upgrade. Luckily, I had good notes from when I first setup the server that I was able to refer to in order to make sure all of the files got copied over and that the symlinks were setup properly. It was a little extra work, but worth it in case I ever have to upgrade or recreate a server instance. I can easily port my data by just attaching the EBS that has the data on it and setup the appropriate symlinks to the server files and website data.

Things to check, just in case

Before completing my project, there were two other things that I made certain to do based on advice in Brian’s post above.

First, I made sure that I was able to access phpMyAdmin. I had to reinstall it using the following command:

After the installation was complete, I checked my old phpMyAdmin.conf file. There were some settings that restricted remote access to phpMyAdmin that I had to copy over to make sure that I could still access it from my local PC.

Second, I made sure that auto start was enabled for the web server and mysql. You can run these two commands to enable auto start for each service:

As Brian recommended, it’s a good idea to reboot the server after enabling auto start to make sure that the services do indeed start automatically.

Finally, once everything is running normally, you should check the performance of your server. I frequently run the top command to check on memory usage by the web service.

Using the ‘>’ character once top loads will sort the process by memory usage. In my case, I saw some marked improvements in memory usage, so I wanted to adjust the number of spare and maximum number of web services that were running. I referenced the following posts to understand better how to fine tune Apache.

Dislcaimer: These steps applied to my specific situation and setup. I am not an Amazon EC2 expert, nor do I work for Amazon. I documented these for my own personal use in case I need to reference these instructions later to remember and recreate what I did. You are more than welcome to reference these steps, but keep in mind that they may or may not work for you depending on the specifics of your setup. What I’m trying to say, in not so many words, is that I’m more than happy to entertain questions, and I will do may best to offer assistance, but I cannot guarantee timely and accurate responses.