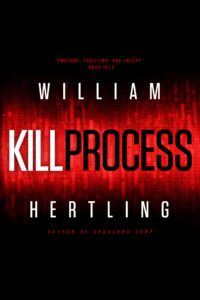 William Hertling is one of my favorite authors. When he sends you an email saying his latest book is available, and you have over 160 books on your reading list, what should you do? Of course, you put Kill Process at the top of it.

I’ve returned to the present day to explore data ownership, privacy, and analysis, as well as social media, computer hacking, and the world of tech startups

The hook was very intriguing, and I was anxious to jump into his latest work.

The main character of the book is Angie, a female computer programmer with a traumatic past. She uses her superior software skills, or hacking skills for lack of a better word, to exact vigilante justice to prevent others from suffering her same fate. Hertling spends much of the first half of the book dealing with this dark subject matter. Throughout, he reveals how fragile and exposed many of our consumer electronic systems are, and how easily they could be turned against us if placed in the wrong hands. It will make you think twice about hooking up your toaster to the internet!

Through the second half of the book, Angie works to build a start-up that is bent on protecting the privacy of internet users. It’s goal is to compete with the dominant social network of the day, Tomo. The catch is that she helped to build Tomo into the dominant company that it is. When she finds out that Tomo is about to launch a product that will seriously compromise the privacy of its users in the name of profit, she decides its time to take matters into her own hands. It takes a while to get there, but in typical Hertling fashion, the last third of the book becomes a page turner that you can’t put down until you finish it.

Kill Process is a stark look at the reality of today’s computer systems and social network vulnerabilities. Tomo is clearly a jab at Facebook, and Hertling exposes how dangerous it can be to have one company in control of your online social presence that is more concerned with profits than the privacy of its users. Whether Facebook actually operates like Tomo, it is not far-fetched that it could head that direction at some point in time. Quite honestly, it’s really only one or two questionable decision from getting there today, in my opinion.

Either way, Kill Process will make you pause, just as Hertling did with the Singularity Series. It will make you think twice about what you are doing as well as sharing online. And it will also make you think more than twice about all of the gadgets that we insist on connecting to the internet. Bottom line, they may not be as secure as we think or want them to be.

Kill Process is a little dark, and it deals openly with some very difficult topics around domestic abuse. I wouldn’t be surprised if some people would find it difficult to read given how graphic some of the scenes are early in the book. It can also get a little technical, which can make it tough to understand if you don’t work in software or technology. However, if you can make it through, you will be rewarded with another gem from Hertling. He does a great job exposing how fragile and insecure our always-connected, internet-of-things network is and can be. If you’re not careful, you may find yourself questioning whether you want any of your electronic gadgets connected to the internet. In fact, you may even consider staying off the internet yourself after reading it!