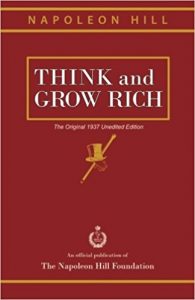 As part of my new routine, I’ve been reading “learning” books in the morning. Many of these books reference other books from where they’ve derived their ideas, or used their concepts as a foundation to build upon. My general rule of thumb is that I don’t add a book to my reading list unless it is mentioned in more than a couple of books. One book that consistently appeared in many of the self improvement books I’ve read recently is “Think and Grow Rich” by Napoleon Hill. Naturally, it made it to my reading list and moved quickly to the top given the number of mentions.

To say Think and Grow Rich is a classic is an understatement. It was first printed in 1937, and it’s still relevant 80 years later. That makes it more than a classic. It makes it a timeless treasure.

One of the most interesting things about the book is its back story. Think and Grow Rich wasn’t the brain child of Napoleon Hill. As the story goes, steel magnate Andrew Carnegie wanted to leave people with a formula for prosperity. He challenged Napoleon Hill to write a book that covered the key concepts and secrets to success. Carnegie (supposedly) didn’t pay Hill, but he introduced him to his circle of successful friends of the time. Hill interviewed and studied how these people achieved their success and distilled his findings into 17 core principles.

Interestingly enough, Hill’s first manuscript, published under the title “The Philosophy of Success” didn’t sell well. Neither did his second attempt, “The Science of Personal Achievement”. It wasn’t until he coined the title “Think and Grow Rich” that people flocked to his book. Apparently, growing rich is something people want more than personal achievement.

The 17 principles are organized in such a way that they generally build upon on one another. While I may feel that some are more powerful than others, they are all generally spot on. It would be tough for me to summarize the book in one sentence. However, Hill does it exquisitely with the statement:

Whatever the mind of man can conceive and believe, it can achieve

And by studying and applying his principles, I believe he is correct.

Think and Grow Rich as a great read. It was full of great concepts and ideas. The challenge now is to figure out how to apply and incorporate these into my daily life and way of being, both personally and professionally.