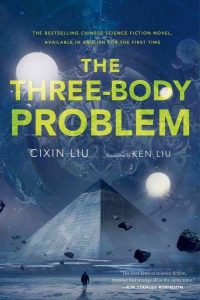 The last book on my 2016 reading list was The Three Body Problem by Cixin Liu. Since I wasn’t able to get through all the books I had on my 2016 list, I carried this one over to my 2017 reading list. To make certain that I read the book this year, I put at the top of the list – position #4.

I discovered the book through a technology blog that I follow regularly, Gizmodo. They periodically review and rate science fiction books, and The Three-Body Problem was highly recommended. Since it also rated well in the Amazon reviews, I figured it was worth checking out. There was also one other aspect to the book that piqued my interest. It is an English translation of a book that was originally written in Chinese. As it turns out, Cixin Liu is one of the most popular science fiction writers in China.

The Three-Body Problem is a book that combines a time component with contact to an extra-terrestrial society . The context of the time component is well played, and the flashbacks keep you engaged as you attempt to piece together the mystery and the journey that Liu is taking you on.

It is what I would consider a “heavy” science fiction book. It employs concepts from both quantum mechanics and astrophysics in the plot. While it helps to have a basic understanding of both areas, it is not necessary. Where Liu uses the concepts, he does his best to explain them in layman’s terms. I will say that his use of these concepts makes for a compelling story and tickles your imagination as to what is possible, and plausible, in his story.

The book reads like a bit of a mystery where you are constantly trying to piece together the events to find out who, or what, is behind the action in the story. There is quite a bit of build-up until Liu eventually does the big reveal towards the end of the story. It was a mind-bender that I had a really hard time wrapping my head around. The science is very deep, and I’ll admit that it felt like I was in over my head. It reminded my a lot of the book Spin by Robert Charles Wilson, which also had a deep technical reveal at the end that explained what was going on but was rooted in very complex scientific theory. As I mentioned earlier, I wouldn’t let this scare you away from the book. If anything, it makes the book more interesting to see how Liu uses scientific theory to create a plausible science fiction story.

For me, what made the book most interesting is that it is written from the point of view of a Chinese author. It was eye-opening to see the portrayal of the Chinese government and its people from his point of view. Even more interesting is seeing how he portrays foreign governments and their influence. Since everything I read is written by American authors from an American point of view, it was fascinating to see how a foreign author views the influence of the American government and the behavior of its people.

While I found the book quite interesting, I wouldn’t put it on my Must Read list. It’s a good book, but it is a little too technical to make the grade. I was also surprised that the character names made it difficult for me to follow the story. This is clearly a cultural thing. In other words, I am so used to American names that reading a book that is dominated by Chinese names made it difficult in places for me to follow the story. In other words, it isn’t a fault of the writer, the book, or the story, and I wouldn’t recommend that it be changed. It was clearly a personal issue for me to be able to make the cultural/language translation work. Again, I found this interesting more than anything else.

Bottom line, if you’re looking for a science fiction book with a good, solid technical under-pinning, then The Three-Body Problem is an excellent read. If you’re looking to be entertained by a sci-fi story that has am entertaining, faster pace, then you may want to look elsewhere.