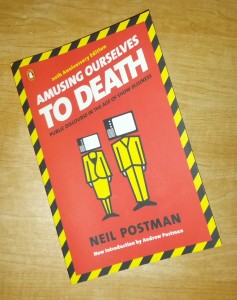 A few months ago, I picked up the Neil Postman book, Amusing Ourselves to Death: Public Discourse in the Age of Show Business. The book was recommended on a couple of blogs I follow and by a friend, so I figured it was a safe read.

The first thing to note about the book is that it is a nonfiction work discussing how technology is changing the way society functions, and not necessarily in a positive way. The second, and more amazing, thing to note is that the book was written in 1985, nearly 30 years ago. Why is this amazing? The book is just as relevant now as it was in 1985, if not more so.

In his book, Postman explores the effect of technology on society. In a very powerful foreword, he contrasts the predictions of George Orwell’s 1984 and Aldous Huxley’s Brave New World. As he puts it:

Orwell warns that we will be overcome by an externally imposed oppression. But in Huxley’s vision, no Big Brother is required to deprive people of their autonomy, maturity and history. As he saw it, people will come to love their oppression, to adore the technologies that undo their capacities to think.

Postman continues by expounding on Huxley’s fears, that he feared “those who would give us so much that we would be reduced to passivity and egoism” and “the truth would be drowned in a sea of irrelevance.” He wraps up with this powerful statement:

In essence, the point of Postman’s book is to show that Huxley’s dystopian view of the future has won out over Orwell’s. And while the book starts out a bit dry as he reviews a history of technology evolution and its impact on public discourse, it is a necessary build up to show how the technology of 1985 was enabling Huxley’s view of the future. What is more amazing, he portends how technology will continue to erode society and culture, and when one looks at our infatuation with the internet, social media, smartphones, and other technology diversions, it’s hard to argue Postman’s point that we’re getting closer to living in a Brave New World rather than 1984.

I must admit that at times, I found the book disconcerting as it left me longing for the past. A time where technology wasn’t prevalent. Where news in one’s community mattered more than news on the opposite side of the world. Where politicians were elected on the basis of their views and knowledge, not on their ability to produce 3 second television sound bytes. Where people engaged in deep, meaningful, rich conversations with one another, not in 140 character messages.

However, once I realized that technology is so integrated and woven into the fabric of our society that there is no going back, the power of Postman’s work became apparent. He does a magnificent job describing how the prevalence of technology affects human psychology and interaction. With that knowledge, I began to consider how people are using technology to influence others (including me), how to recognize it, and how to use it. In other words, we shouldn’t fear technology, but rather embrace it, understand its effects, and learn how to use it as a tool rather than letting it use us.

My recommendation, Amusing Ourselves to Death is a must read book. It will open your eyes to how technology has changed society and how it continues to do so, in ways that aren’t necessarily positive. It will make you think, particularly how you interact with all of these amazing inventions, gadgets, and diversions that we’re provided today. It also encouraged me to pick up a copy of Brave New World (which I’ll review later), and it has me interested in picking up Postman’s follow-up book to Amusing Ourselves to Death entitled, Technopoly: The Surrender of Culture to Technology.

7 thoughts on “Book Review: Amusing Ourselves To Death”