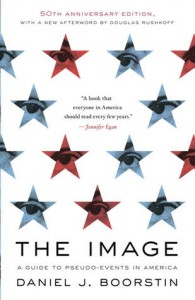 Ryan Holiday’s Trust Me I’m Lying: Confessions of a Media Manpiulator had a profound impact on how I view and consume modern media. It’s an eye-opening account, many times from a first person point of view, of how the general public can be manipulated, coerced and deceived through clever marketing tactics. It is a book that I regularly recommend to people who are interested in understanding modern marketing. One of the books which Holiday references for additional reading is Daniel J. Boorstein’s The Image: A Guide to Pseudo-Events in America. Given how much I liked Trust Me I’m Lying, I felt The Image would be worth reading.

The Image was written in 1962. As such, you would think that the book would not be applicable in today’s modern day media world of real-time news, the internet and social media. On the contrary, Boorstein’s work is much like that of Neil Postman’s Amusing Ourselves to Death. It is an ominous look at the impact of technology on society. The principles that Boorstein covers are the foundation of today’s media and marketing machines, and the same principles can help to explain the emergence and popularity of social media sites such as Facebook and Twitter. In other words, the concepts in The Image are timeless. They are rooted in human behavior and not tied to the technology of his era or ours. In fact, I suspect the his work will be just as applicable 25 years from now as it is today, and as it was at the time he wrote it.

The Image is broken down into six sections, which cover the following:

Overall, I found The Image to be a challenging read. The book reads much like a college level text book. The points in the book are explored thoroughly and explained in excruciating detail. However, if you can power through the prose in each section, you will be rewarded with golden nuggets of information. For example, when describing celebrities, Boorstein makes the following, powerful observation:

Yet the celebrity is usually nothing greater than a more-publicized version of us. In imitating him, in trying to dress like him, talk like him, look like him, think like him, we are simply imitating ourselves.

Similar, powerful observations are sprinkled throughout the text.

For me, The Image builds off of the concepts that I have taken from Postman and Holliday’s books. I wouldn’t recommend The Image as a Must Read on its own. It is a book that you would want to read if you are deeply interested in the mechanics of marketing and modern day media. In other words, if you are involved in marketing or want to learn about the techniques that media and public relations firms use to influence public perception and opinion, then I would recommend reading it. However, I would recommend Amusing Ourselves to Death and Trust Me I’m Lying first, then follow those up with The Image. It will give you a deep understanding of the modern-day marketing machine and the blueprint of how to make one.

2 thoughts on “Book review: The Image – A Guide to Pseudo-Events in America”