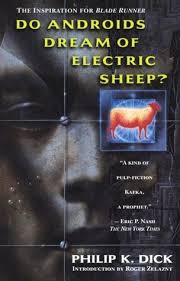 Philip K. Dick’s Do Androids Dream of Electric Sheep is a classic. It’s amazing to me how much of the book is relevant today. While PKD may have been a little off with how soon his fictional androids would become a reality, it’s quite possibly a future that is not that far away.

If you’re not already aware, Do Androids Dream of Electric Sheep was the basis of the original Blade Runner movie. I first saw the movie in the late eighties and really enjoyed it. It was many years later before I realized that it was based on PKD’s book. I make a conscious effort to read classic science fiction, so I added it to my reading list. The book languished on my never ending reading list for a few years. When Blade Runner 2049, the sequel to the original movie, came out last year, I decided it was time to move the book up in my reading queue. I was determined to read the book before seeing the movie (which, by the way, I still haven’t seen yet).

For the most part, I found that the original movie stayed pretty true to the book. One of the biggest differences for me was the depth of the characters in the book as compared to the movie. The movie focuses more on the action and interplay between android bounty hunter Rick Deckard (played by Harrison Ford) and rogue android Roy Batty (played by Rutger Hauer). The book, however, is more focused on Deckard and his emotional struggles as a bounty hunter living in a desolate, depressing, post-apocalyptic world where owning a live pet as opposed to an electric one is seen as a major statement of one’s status. Despite this difference, It makes sense that the book was adapted for the big screen. I doubt the inner dialog of Rick Deckard in the book would have translated well. I don’t fault the screen writers who did the adaptation. It makes each work good in its own way.

Whether you are a fan of the original Blade Runner movie, or even if you’ve never seen it, Do Androids Dream of Electric Sheep is a Must Read. It is classic science fiction through and through. It’s a glimpse of a future from 50 years ago that doesn’t feel quite as far fetched as it once was. Books like this one are exactly why I read science fiction. They expand your imagination and open your mind to future possibilities. They help you breakdown the barriers and limitations of today’s technologies. I’m certain there are many current books that we will look back on in 20 or 25 years and marvel at how prescience the authors were about technology and its impact on society.

Now that I’ve checked Do Androids Dream of Electric Sheep off of my reading list, I can turn my attention to watching Blade Runner 2049. I know reviews were mixed, but the original Blade Runner was just as polarizing when it theaters 35 years ago. People seemed to either love it or hate it. Given my preference for both the original movie and book, I have a feeling I’m going to like it. On the other hand, I’m also going to be careful not to set my expectations too high.

I had heard a lot of good things about the science fiction writing of PKD. Do Androids Dream of Electric Sheep is the first work of his I’ve read. Given how much I liked it, it definitely won’t be the last. If you have any good PKD recommendations, please feel free to leave them in the comments. Thanks!

1 thought on “Book review: Do Androids Dream of Electric Sheep”