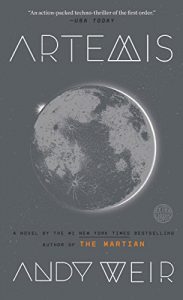 The Martian is one of my all-time favorite books. I loved the near-term science fiction that seemed to cover all the intricate details of a manned mission to Mars. The first person narration from astronaut Nick Watney’s point of view was top notch as well. It felt like I was stranded on Mars with him.

When author Andy Weir came out with his second novel, Artemis, there was no question in my mind that I was going to read it. I was eager to see if he would tackle the challenge of establishing a colony on the moon with the same level of detail as he did a manned mission to Mars. I was also looking forward to being entertained, which certainly wasn’t an issue in The Martian. Let’s see how Weir did with his follow-on.

The technology discussions in Artemis are excellent. Weir goes into a deep level of detail that makes a colony seem so plausible you wonder why it isn’t already happening. He details how low earth orbit is used to shuttle people back-and-forth between the Earth and the moon. He explains how a smelter is built to create the aluminum that is not only necessary to build the structures on the moon but also to supply the oxygen needed to support life (hint – oxygen is a byproduct of the smelting process). He goes into the detail of the jobs required to keep the operation running, how supplies are transferred to and from the moon, how important tourism is to the moon’s economy, and even how indifferent the moon colonists are to the popular tourist attractions like the site of the first lunar landing. I don’t know where Weir gets the information for his books but he either he has an inside source at NASA feeding him information, is very creative, or is just one smart dude that NASA needs to hire!

As for the story, it was OK. The plot followed a similar arc to plenty of other books I’ve read. Don’t get me wrong, it had its share of twists and turns, but it didn’t necessarily break any new ground. I’d say the technology was the more interesting part of the book with the story playing a supporting role. Bottom line, the technology side lived up to its billing, but the story didn’t match the entertainment value of The Martian.

Overall, I’d say that Artemis is a Fun Read, particularly if you enjoyed The Martian. While the entertainment value may not be as good, the technology discussion is outstanding. I wouldn’t be surprised if an eventual colony on the moon closely resembles what Weir’s described. For that reason alone, Artemis is worth adding to your reading list.