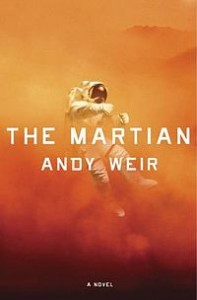 It’s hard for a book that comes so highly recommended to meet expectations, let alone surpass them. The Martian by Andy Weir is one such book. It lived up to its billing and more.

I added the book to my reading list after it appeared in the Amazon recommendation engine, but it was a review of the book by Brad Feld that piqued my interest. I’ve picked up a few other strong science fiction reads through Brad’s blog. and his favorable review encouraged me to move it ahead of other titles on my 2014 reading list.

This review is going to be a bit longer and more philosophical than most, so here’s the short summary. I thought the book was great and have added it to my Must Read list. I’d say it’s the second best book I’ve read this year behind Mr. Penumbra’s 24-hour Bookstore. And now for the reasons why I liked it.

As with most good books, the story premise is very straight-forward. NASA has started manned missions to explore Mars. During one of the missions, the crew is forced to evacuate and cut its mission short due to an intense dust storm that hits their encampment. During the evacuation, astronaut Mark Watney gets separated from the rest of the crew and is left for dead. Fortunately for Mark, he survives the separation. Unfortunately for Mark, he’s alone on Mars. The rest of the book is an exercise in creativity and perseverance as Watney does his best to survive the rugged Mars environment while waiting to be rescued.

Outside of the science in the book, which is amazingly detailed and believable regarding how we would conduct manned Mars missions, there are a lot of valuable lessons that I gathered from reading the book.

So yes, while the book may be a fictional tale, there are some hard life lessons that Weir has embedded in the story that apply to more than Watney’s survival story on Mars. They can be applied to projects and events in our everyday life.

The Martian is very well written with a great mix of hard science fiction with many, many humorous moments mixed in. If you are a left-brained engineering type like me, you’ll totally relate to Watney’s thought process, his approach to his predicament, and the technology (or lack thereof) he uses to solve the problems he faces. The book may be a tougher read if you are right-brained, but you’ll gain great insight into how an analytical, engineering minded person approaches and solves problems.

To summarize, I highly recommend it. You won’t be disappointed.