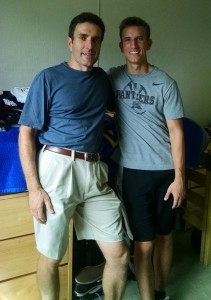 During this past Labor Day weekend, I had the opportunity to visit Ypsilanti, MI. I wish it was a recreational visit, but Lisa and I went there to send our second off to college at Eastern Michigan University.

(By the way, if you’re unfamiliar with Ypsilanti as I was until this past April, it’s about 25 minutes west of Detroit and 10 minutes east of Ann Arbor – the home of the University of Michigan)

Overall, the drop-off went well, but it made for a busy weekend. In our quest to round-up all the supplies that we didn’t take with us or couldn’t fit in Brad’s luggage, I discovered the location of nearly every Target and Wal-mart within a 10 mile radius of Ypsilanti. I even got to check out a couple of Big Lots store locations too!

Here are a few photos from the weekend, a couple of thoughts about the area, and a couple of places worth checking out that aren’t a Target or Wal-mart.

The Eastern Michigan campus is a beautiful campus. It’s among the nicest I’ve visited and has a great mix of both old and new buildings. It’s also self-contained, doesn’t have any major city streets running through it, and has a number of grassy open areas spread about the campus. When we first visited in April, the grass was dormant, and the trees had yet to show their leaves due to the extended winter snows in the upper Midwest. This time around, the grass was a lush green, and the trees were covered in leaves. It was quite a site coming from the brown, drought-stricken surroundings in Southern California. Below are a couple of pictures of various portions of the campus.

A view looking towards campus from the student center. Lisa and I were jealous that the water is so plentiful that they can shoot it into the air!

The EMU student center – it’s one of the newer buildings on campus.

On the other hand, Starkweather Hall is one of the oldest buildings on campus dating back to 1896. It has been designated a Michigan Historic Site and is listed on the National Register of Historic Places. 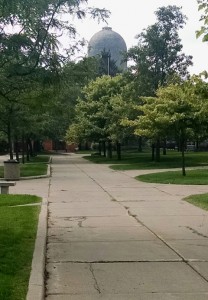 The famous Ypsilanti water tower can be spotted from various areas around campus. 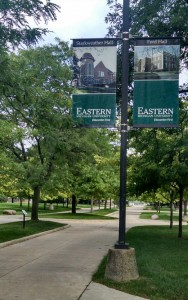 Following the school’s colors, there’s plenty of greenery around campus, at least in the summer. I’m sure these same paths will turn white at some point later this year, or early next.

Here are a couple of general thoughts that I had while visiting:

There were also a couple of places that I particularly enjoyed during our visit:

This trip was our second college drop-off in as many years. Even though they say the first is the hardest, the second wasn’t any easier. We still have two more to go, and I don’t expect them to be any easier than our first two.

5 thoughts on “Sending off the second”