Spolier alert – if you haven’t read Nexus, or are in the middle of it, be aware that there are a few mild spoilers in this review of Crux. In case you’re wondering, the short summary is that I didn’t enjoy it as much as Nexus, and it didn’t make my must read list. 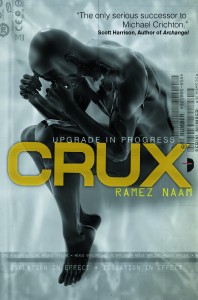 While browsing my lengthy Amazon wish list recently, I noticed that Crux, the sequel to Nexus by Ramez Naam, was available. I thoroughly enjoyed Nexus, so I figured Crux would be worth a read. I was curious to see where Naam was going to take the story and the technology.

Crux picks up where Nexus leaves off. Kaden and Feng are on the run hopping from monastery to monastery in Southeast Asia. Sam has found the Nexus children in Thailand and is bonding with them. Shu is confined to a quantum computer. Rangan and Ilya have been imprisoned. The US government is trying to figure out how to contain the spread of the Nexus drug. Naam develops each of the plot lines throughout the book as well as introducing a couple of new ones, interleaving them every couple of chapters. At times, he weaves the stories together, and then slowly brings them all together as the book draws to a conclusion.

Because of the multiple story threads, Crux is an ambitious work. In my opinion, the book tries to manage too many stories at one time which made it confusing and difficult to follow at times. I found myself having to flip back often to remember how stories where left before I could continue on.

In addition, Crux was much lighter on technology development and action than Nexus. Instead of further developing the Nexus technology, Crux delves more into the moral and ethical issues facing a posthuman world. One question is how governments will deal with posthumans created by Nexus. Since they are more advanced in capability and intellect than humans who have not taken the drug, should they be banned? What risk do they pose to “normal humans”? Should we facilitate the possible advance of posthuman technology and potential evolution of humans, or outlaw it to protect our current way of living?

In addition to posthuman technology, Crux also explores the moral and ethical concerns that arise when one person has complete control over a technology. Given that Nexus allows you to control a person or hack into them through back doors, it makes for an interesting dilemma. While the person in power feels as though he is manipulating the technology for the greater good, is it a greater good that is in society’s interest, or just his? Likewise, what is the risk if the control is propagated or falls into the wrong hands?

While these are great questions to ask around Nexus, I’m not convinced that the book is the proper venue to explore them so deeply. I would have preferred that the issues were raised and addressed, but not explored in such detail. It could have helped to shorten the book and keep the story moving along at a faster pace.

While I feel Crux is a well written book, it was a tough read for me. It took me a lot of effort to plow through it as the action was slow, and the story stalled in many places. I’m still a huge fan of Nexus and continue to highly recommend it as one of my must read books. Unfortunately, I wouldn’t put Crux in the same category. Sure it’s a good book, but there’s a lot of other material out there, such as those on my 2014 reading list, that I would recommend ahead of this one.