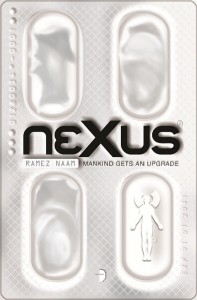 Through the wonders of the Amazon recommendation engine, the next science fiction book that caught my eye was Nexus by Ramez Naam.

Nexus has a fascinating plot. A nano drug has been created that permits people to link their brains together wirelessly. The effect allows people to tap the powers of the brain to do amazing things, or extremely nefarious activities depending on the intentions of the user.

Nexus is an outstanding science fiction read that explores all angles of technology. It looks at the amazing promises of technology, the fear of the unknown which results in government regulation and crackdown, and the co-opting of technology for purposes of espionage and warfare. Nexus left me intrigued about the possibilities of technology to empower humans to do amazing things while at the same time questioning whether it’s a future that we would want to achieve. The ethical dilemmas which Naam presents are as deep as they are meaningful.

The book also does an excellent job of portraying the science fiction in a way that makes it fun and easy to understand. There are some great hacking scenes that anyone with even a minimal software background will appreciate. I really liked how Naam took practical software development problems and applied them to the hypothetical Nexus drug described in the story.

Obviously, Nexus is high on my list of must read books. I can’t recommend it strongly enough on numerous levels. It’s a great read that contains ideas that will challenge your mind and has plenty of suspense (and action) to keep you thoroughly engaged. I was able to fly through the book in no time and was left wanting more at the end. Luckily, Naam already has a follow-up out called Crux, which I am looking forward to picking up after I knock out a few more titles from my seemingly infinite wish list on Amazon.