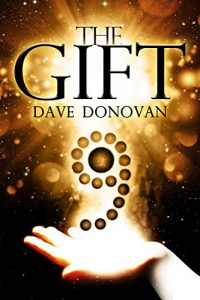 I’m not 100% certain how I found my latest read, The Gift by Dave Donovan. My best guess is that my old nemesis, the Amazon recommendation engine, suggested it. The description looked promising, the reviews were generally positive, so I added it to my reading list. After that, I believe it showed up as an Amazon daily deal, so I snagged a copy for my Kindle. According to my Amazon purchase history, that was back in October 2014. OK, so I let it set for almost two years before getting around to reading it. At least it finally made it to the top of my queue unlike some other books that I fear will be buried on my reading list for years to come, or possibly even decades.

There were a couple of things I particularly liked about The Gift. First of all, it was refreshing to read a ‘first contact’ book where the aliens want to help rather than eat us. In fact, it may be the first ‘first contact’ book I’ve read with a positive outlook on extra-terrestrial life forms. Nearly every book portrays aliens as evil creatures who want to eradicate or subsume the human race. I also found the sci-fi technology portrayed in the book to be interesting. At first blush, the technology would appear to be far-fetched. However, after reading Ramez Naam’s Nexus and William Hertling’s Singularity Series, I don’t think it is that outlandish at all. These factors combined with the general story make it worth reading.

Unfortunately, for me, I probably read it two years too late. I’ve read a lot of science fiction works over that time, and while the book is well done, the story arc well developed, and the science fiction interesting, the plot is formulaic. It has a hero with a troubled military past who has a strained relationship with the antagonist, who is a military officer. The hero is also smarter and more respected than the antagonist and his cohorts. The antagonist also has an over-inflated ego that ends up being his undoing. Not to be a spoiler, but the hero wins out in the end, as you would expect. Again, my apologies, but this shouldn’t come as a surprise. Based on the number of books I’ve read that portray our modern military, I’m beginning to wonder if all military commanders are extreme egomaniacs. It’s certainly what most of the fiction I read would lead you to believe.

On the whole, I liked Donovan’s work. It is a well written story that will keep you engaged. It gets off to a bit of a slow start while Donovan builds the characters and story line, but then it picks up speed through the second half of the book. It got to the point where I couldn’t put it down and just had to finish it. It reminds me of many other books I’ve read such as Resurrection, Fluency, Brilliance, and Wired. In other words, it’s well written and entertaining, but not a must read. I’d recommend it as good entertainment for a long weekend or while you’re on vacation.

1 thought on “Book Review: The Gift”