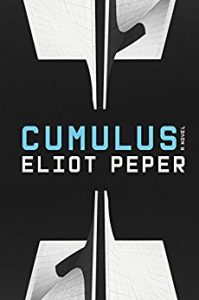 I enjoy discovering and reading new authors, especially those that aren’t well known. I also find reading from a variety of authors important. Each has their own life experiences and philosophies that permeate their works.

One of the “undiscovered” authors I enjoyed reading during 2015 and 2016 was Eliot Peper. Even though I’m not a huge fan of the trilogy, I really enjoyed his Uncommon Stock series. I made it a point to put one of his more recent releases, Cumulus, on my 2017 reading list.

It took a while, but I finally got around to reading it over this past summer.

Instead of providing my own synopsis for the book, I’m going to use this summary that I came across on Eliot’s own site. It captures the prevailing themes of the book perfectly.

Cumulus explores a near future San Francisco Bay Area ravaged by economic inequality and persistent surveillance. Popular Science calls it, “An intriguing, fast-paced thriller that looks closely at the most pressing issues facing the nation: a growing wealth gap, corrupt governments and an ever-increasing surveillance apparatus that threatens the country’s very character. Cumulus holds up a mirror to ourselves, and shows just how scary the world could be right around the corner.”

The plot of the book centers around the struggle between an underprivileged individual who teams up with the rebels who are trying to bring down the omnipresent, powerful company who is holding them down. Based on the amount of science fiction I read, the plot was somewhat predictable. You know how the book will end, but the fun isn’t in the ending. It’s in the journey Eliot takes you on to get there. As he did in Uncommon Stock, Eliot writes an engaging story that makes the book hard to put down.

Even though Cumulus is a fictional tale, the undertones of the story are all too real. The description of how a powerful company could come to dominate the socioeconomic underpinnings of society is not that far fetched. You can see it today in the amount of information and power that Silicon Valley companies such as Google, Facebook, and Apple wield in the Bay Area. Cumulus exposes the perils that such a scenario could create due to the stratification of society into the have’s, meaning the people who work for and with the powerful companies, and the have-nots, which are those who struggle day-to-day to make ends meet.

I wouldn’t consider Cumulus a Must Read, but it clearly fits into my category of Fun Reads. Eliot Peper is a good author who writes really well. His stories are solid, and the characters are well constructed. Cumulus will certainly keep you entertained, and even enlighten you a bit.