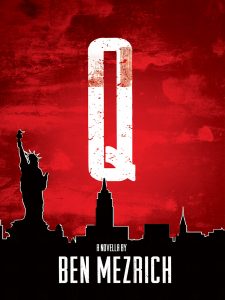 I’m not 100% sure exactly how I came across Q by Ben Mezrich. I’m pretty sure that I first saw it via the Amazon recommendation engine. The description was enough to get it on my reading list, and then a positive review by Brad Feld moved it up onto my 2016 reading list.

Within the first few pages of the book, it’s pretty obvious that the ‘Q’ in the book stands for Quarantine. The story takes place in the near future where an aggressive, highly contagious virus is wreaking havoc. In order to prevent the spread of the disease, “infecteds” and those suspected of being infected (“probables”) are rounded up and shipped off to a remote island. The story focuses on the mental struggles of a cop on the front lines who is responsible for capturing people identified by the government.

The book reminds me a lot of Farenheit 451. I would goes as far as to say that it is a modern day version of that book that is focused on disease rather than information control. Much like Farenheit 451, the protagonist in Q begins to question whether he is doing the right thing by following orders to round up suspected infecteds. After an assignment takes a wrong turn, he decides to take matters into his own hands. In doing so, he discovers a side of the quarantine that he didn’t know existed, which causes him to sympathize with the plight of those infected. Just like in Farenheit 451, the hunter turns into the hunted in his quest to find out the truth.

While I wasn’t a huge fan of Farenheit 451, I liked Q. The story is well written and moves quickly. As noted on the cover, it’s a novella. The shorter length means you’ll be able to read through it within a night or two. It also has quite bit of action in it and enough suspense that it will keep you both entertained and engaged while you read through it.

The most eerie piece of Q is that much of the plot is based on quarantine laws that are real. In other words, if a true disease epidemic were to break out, many of the scenarios that Mezrich describes in the book could take place if these laws were invoked. Given how many diseases have come close to turning into epidemics, it certainly gives one pause knowing that it wouldn’t take much for the government to implement the tactics described in ‘Q’ if they felt it was in the public’s interest. Which then begs the question, how does the government determine when it is in the public’s best interest to implement such laws?

I wouldn’t highly recommend Q, but it’s worth reading if you’re looking for a short read that will certainly provoke a bit of thought about how the government might handle a quarantine.

With the completion of Q, I’ve made it through the first 10 books on my 2016 reading list. I’m not as far along as I’d like to be, but I’m making progress. My goal is to still get to 30 books for the year, so I’m going to have to step it up a bit over the last five months in order to get there.