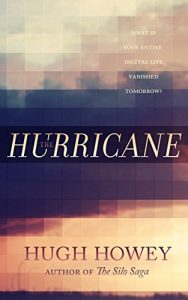 I’m a fan of Hugh Howey. Ever since reading Wool, I’ve enjoyed picking up both his long form novels and short stories. He has a way of building an immersive world and making you feel a part of it. In addition to the Silo Series built off of Wool, Shift and Dust, he did the same in Sand and Beacon 23. To put it simply, he knows how to tell a story. Every year, I do my best to have at least one Howey book on my reading list. This year, it was The Hurricane.

The Hurricane is bit of a different book by Howey. It’s not steeped in science fiction, it’s not a series or trilogy, and it’s not a short story. It’s a stand alone novel that is targeted more towards the teen / young adult audience. Still, the story telling does not disappoint. It’s written in that typical Howey style where he immerses you in the environment and makes you feel like a part of the story.

The story centers around teenager Daniel Stillman who is, to put it mildly, a bit socially awkward. He keeps a small digital footprint. It’s not cecessarily because he wants to. He just doesn’t have a huge network of online or IRL friends. When his one and only best friend invites him to a party he’s not supposed to be at, he becomes the target of an embarrassing practical joke. Before he can become an online celebrity for all the wrong reasons, he is rescued by, of all things, a hurricane that unexpectedly strengthens off the coast of his small South Carolina town. The town takes a direct hit, and Daniel and his family are left to pick up the pieces. In the aftermath, Daniel learns valuable lessons about his family, his friends, his neighbors, and most importantly, himself.

Even though the story is teen oriented, I still found it very enjoyable. I wouldn’t call it a Must Read, but it definitely fits into my Fun Read category. It’s another great story by Howey that reads like an extended version of one of his short stories.

Given how active the 2017 hurricane season was with Harvey, Irma, and Maria, The Hurricane ended up being a timely read. It’s a great book to read during a vacation, long weekend or holiday break. It’s well written, reads fast, and keep you entertained. Just be aware that Howey paints vivid images of the hurricane and the effects of a direct strike. In fact, for those affected by the storms, it might be a little too soon to pick up. It wouldn’t surprise me if it triggered PTSD-related reactions. Yes, the mental images are that vivid.

2 thoughts on “Book review: The Hurricane”