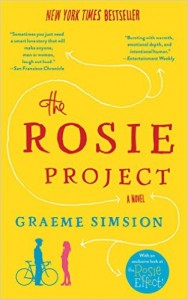 I’m always on the lookout for books to add to my reading list, even though it continues to grow faster than my reading pace. Case in point – near the end of 2014, I saw a post on one of my favorite tech blogs Gizmodo titled “Bill Gates’ favorite books of 2014 are the smart gifts for the holidays“. The top book on his list was The Rosie Effect, which was the Graeme Simsion’s sequel to The Rosie Project. It didn’t neatly fit into one of my typical reading genres of science fiction or business biographies, but being it was at the top of Gates’ best books for 2014, I figured it must be decent, so I added it to my reading list. Well, it took over a year, but The Rosie Effect finally made it to the top of the queue. Since I don’t like starting with the sequel, I figured I should start out by reading The Rosie Project first. Quite honestly, despite being highly recommended, I don’t personally know Bill Gates, so I wasn’t sure what to expect.

The Rosie Project is about a professor of genetics who decides it is time to settle down. The rub is that Professor Don Tillman has Asperger Syndrome. As such, he’s highly challenged in his social interactions and interacting with others in typical social settings, so finding someone to marry is not a straight forward task. In his effort to find a wife, he decides to embark on ‘The Wife Project’. It’s Don’s way of handling every item in his life – boil the objective down into a logical set of tasks that will result in a solution to the problem at hand. He creates a questionnaire (16 pages, double-sided) to filter out candidates that he determines will meet his compatibility standards. When one of his closest, and pretty much only, friends who is supposed to help with the screening process unexpectedly sends him a candidate who has not been properly screened, Don’s life is turned upside down. He ends up embarking on the adventure of a lifetime, a hilarious one at that.

I really enjoyed the book. Whatever expectations I may have had going in, which weren’t many, were totally blown away. It’s written in the first person narrative, and it’s done extremely well. Graeme makes you feel as though you are Professor Don Tillman. It’s easy to empathize with his struggles, and I found myself rooting for him throughout the book and was emotionally drawn into it. I also loved the fact that Graeme doesn’t beat around the bush. He jumps right into the story, keeps the plot moving at a brisk pace throughout the book, and builds the characters through the story rather than outside of it.

Since it is a first person narrative with a male central figure, it could appeal to a male audience more than a female audience. However, it is so well written that I believe anyone will appreciate it. It’s especially easy to relate to if you work around engineers, scientists, or other people who live their life in a highly structured manner.

If you like the Big Bang Theory, especially the Sheldon character, you’ll love the Rosie Project. If you hate the show, especially Sheldon, you might find it a challenging read. If you’re neutral to the show like I am, you should still love it. It’s clearly one of my Must Reads. It’s engaging, it’s entertaining, it has action & adventure, and it’s hard to put down from the instant you pick it up.

So am I going to read The Rosie Effect? I don’t know. I enjoyed The Rosie Project so much that I’m not sure I want to take the risk of being disappointed by the sequel. Graeme has set a high expectation bar. For now, I’m going to keep it on my list, but I plan to move on to some other books first. Who knows, The Rosie Effect may make a surprise appearance at the top of my reading list if I decide to read something outside of my usual genre of books in the future.