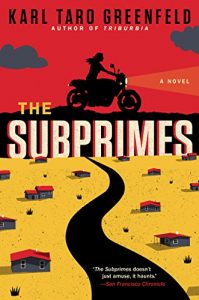 Despite my contentious relationship with the Amazon recommendation engine, it continues to have a significant influence on my reading list. The Subprimes by Karl Taro Greenfield is yet another example of a book that I found through their email newsletter. I purchased it near the end of 2016 (thanks again Amazon for the reminder), and it languished on my reading list for a couple of years before I finally managed to get to it earlier this year.

The Subprimes looks at the downsides of privatizing everything, and when I say everything, I mean every. last. thing. The government has effectively gone bankrupt and outsourced all public service to for-profit corporations. The result is that people are segregated based on their credit scores, which explains the name of the book. Those with a subprime credit rating are effectively discriminated against. They find it difficult to get jobs. They are unable to secure any kind of credit. It’s difficult to acquire even the basic necessities such as food, clothing, and transportation. In effect, they become outcasts.

There are a lot of political undertones in The Subprimes. It looks at a possible, albeit extreme scenario, where capitalism runs amok. In the search for profit, corporations look to extract every last dollar out of society. Their primary target is the weakest, preying on the poor and destitute who don’t have the means to fight back.

While the book can be dark and demoralizing at times, Greenfield finds a way to turn it into a feel good story about the perseverance of the human spirit. I found the story engaging and entertaining until the last portion of the story. It got a little too weird for my taste at the end, which took some of the shine off of the book for me.

While I wouldn’t recommend The Subprimes next to other books on my Must Reads or Fun Reads list, I wouldn’t completely discount it either. I would consider it a light casual read. It’s an interesting book that offers another perspective on the potential downsides of unregulated capitalism when companies are allowed to seek profit at any cost.

1 thought on “Book review: The Subprimes”