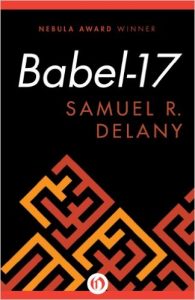 I’m not sure how I stumbled upon Babel-17 by Samuel Delany. My best guess is that is was through the Amazon recommendation engine. At some point in the past (April 12, 2014 according to Amazon, but who’s counting), I purchased the book through an Amazon Kindle Daily Deal. Since the book fit into my theme of classic science fiction, I figured I should bump it up my reading list. I’ve been trying to mix in more classic science fiction as there are a lot of common themes from the past that pervade current science fiction. I’ve also been looking to clean out some books that I’ve purchased in the past but haven’t gotten around to reading. Killing two birds with one stone seemed like a good plan.

Babel-17 was originally published in 1966, and it won the Nebula Award for Best Novel in 1966 and was nominated for The Hugo Award for Best Novel in 1967. The book explores the use of language, specifically how one could use it as a weapon. The book is set far into the future, and many of the book’s settings feel as though they have come out of a scene from Bladerunner, which wasn’t released in theaters until 16 years after the release of Babel-17. There’s discussion of human augmentation, implants, and the ability to revive people from the dead.

The plot of the book revolves around a female linguist, Rydra Wong, who is recruited by the government to decipher a language which is believed to be the key in identifying the tactics of an enemy who is looking to infiltrate and destroy Earth and its allies. As part of her journey to decipher the language, known as Babel-17, Rydra discovers that the language is more powerful than a simple communication mechanism. In fact, it can be used to control people and use them as weapons against their will.

I had a hard time making it through Babel-17. The plot jumped around too much for my liking, which made for many environments and characters to try and keep track of. The action of the book also moved at a slower pace than what I am accustomed to and like. Truth be told, it was most likely a disconnect in expectations I had for the book. It’s a deeply philosophical book that is as much a commentary on society and the use of language as much as it is a sci-fi novel.

Unlike some other classic science fiction I’ve read, Babel-17 doesn’t feel like it has managed to survive the test of time. I’m certain that it was a ground-breaking novel in its time and was worthy of the awards that it was nominated for and won. I have no doubt about that. It just wasn’t a good fit for me and the type of recreational novel that I enjoy.

Babel-17 reminds me a lot of my recent read of The Forge of God. They’re both good books, which were great in their own time, but there are other classic science fiction works I would recommend ahead of these. For example, Neuromancer is one such novel that comes to mind.

Even though my last two classic science fiction books haven’t panned out as well as I would like, I’m still going to keep it as one of my reading themes. I find it interesting to understand the thinking and foreshadowed technology at the times these books were written. And every now and then, I find a great read that does transcend time, and in some cases can be more relevant now then when it was first published.