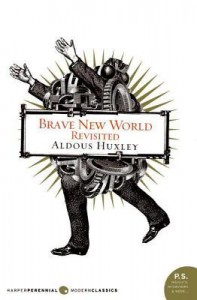 For most people, Brave New World is required reading while in high school. I wasn’t one of them. But after reading Neil Postman’s Amusing Ourselves to Death, I decided it was time to pick-up Aldous Huxley’s classic, almost 30 years after my high school graduation. There were just too many references to it in Postman’s book to ignore.

I was a little concerned as I ventured in given what I heard others say, including my own kids. Still, it felt like the right thing to do, and it was. I thoroughly enjoyed it. In fact, I was blown away by Aldous Huxley’s ability to foreshadow the homogenization of society due to the effects of mass media. It made enough of an impact, that I added Brave New World Revisited to my 2015 reading list. I wanted to get more insight into Huxley’s point of view and how it influenced the writings and concepts in Brave New World.

Brave New World Revisited is essentially a collection of a dozen short essays written by Huxley. The topics covered range from the importance of population control to the effects of over organization to selling and persuasion techniques to the importance of education. Even though the essays were written 20 years after Brave New World, it shows you how Huxley’s views influenced the transformative novel.

These are few of the more salient quotes that I took away from the book:

On Increasing Bureaucracy and Centralization of Power

We see, then. that modern technology has led to the concentration of economic and political power, and to the development of a society controlled (ruthlessly in the totalitarian states, politely and inconspicuously in the democracies) by Big Business and Big Government.

Propaganda and mass media in democracies

They [advocates of free press] did not foresee what in fact has happened, above all in our Western capitalist democracies – the development of a vast mass communications industry, concerned in the main neither with the true nor the false, but with the unreal, the more or less totally irrelevant. In a word, they failed to take into account man’s almost infinite appetite for distractions.

On discourse in modern politics

Under the new dispensation, political principles and plans for specific action have come to lose most of their importance. The personality of the candidate and the way he is projected by the advertising experts are the things that really matter. In one way or another, as vigorous he-man or kindly father, the candidate must be glamorous. He must also be an entertainer who never bores his audience…. All speeches by the entertainer-candidate must therefore be short and snappy. The great issues of the day must be dealt with in five minutes at the most – and preferably (since the audience will be eager to pass on to something a little livelier than inflation or the H-bomb) in sixty seconds flat…. The methods now being used to merchandise the political candidate as though he were a deodorant positively guarantee the electorate against ever hearing the truth about anything.

While some of Huxley’s views are extreme, especially some 60 years later in our age of tolerance and political correctness, they still make for an interesting point of view and counterpoint to modern culture. For example, his views on overpopulation may not be popular, or even accurate, but they are worth considering given the strain humans are putting on the resources of our planet. It’s also interesting to see how he viewed the effects of media with skepticism. It was especially poignant given that the scars of WWII and Hitler were still fresh in Huxley’s mind. There are many examples in the book where he demonstrates how media can be and was used to control the masses and enable dictators.

So while the majority of the things Huxley portended in Brave New World have not come to pass (at least according to this recent post on IO9), there are still many lessons we can learn from studying Brave New World itself and the underlying tenets Huxley used to construct it.

Overall though, unless you are a big fan of Brave New World or have a deep interest in understanding the effects modern technology and mass media are having on society, I wouldn’t recommend running out to read Brave New World Revisited. On the other hand, if you have a deep interest in marketing, advertising, communications or philosophy, it would be worth your time to pick up this short book. Huxley’s concepts are still applicable some 75 years after he wrote Brave New World, and they can go a long way to helping you understand what’s at the core of the human psyche and how to influence it.