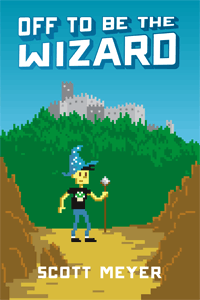 For months, my nemesis, the Amazon recommendation engine, kept recommending Off to Be the Wizard by Scott Meyer. Since I’m not a big fan of the fantasy genre, I resisted the urge to see what it was about. Curiosity finally got the best of me, and when I realized the book wasn’t a Harry Potter style book about sorcery, I figured it was worth adding to my reading list. It certainly didn’t hurt when it showed up on the Amazon Daily Deal list.

The book is a very interesting concept. A young man named Martin, who seems disillusioned and bored in his job, stumbles across a strange computer program while tinkering one evening. To his amazement, he discovers that it isn’t an ordinary computer program. It is, in fact, the computer program that controls the simulation known as life. With it, he can control the movement of objects, his place in time and space, and his bank account balance. Of course, with such power comes great responsibility, and Martin ends up being very irresponsible. It forces him to flee his current day environment, and he chooses medieval England as his destination. Shortly after his arrival, and to his surprise, he discovers that he isn’t the only one who has discovered the computer program and has seemingly supernatural powers. What ensues is an adventure filled with humor and intrigue.

I found the concept of the book to be very interesting. It has a Matrix-like feel to it, but in a different way since Martin and his “wizard” friends have more control over their environment. The book is also well written, especially when you consider that it is Meyer’s first novel. I like the way he mixed in pop culture references from the seventies, eighties, nineties, and early 2000’s. I also enjoyed his liberal use of humor. There were a couple of instances where I caught myself laughing out loud, which doesn’t happen often.

Unfortunately, I was a little disappointed in the overall execution of the book. While I liked the concept, the plot took a long time to develop. If felt as though there was quite a bit of superfluous material through the center of the book, and there were times where I just wanted him to get on with it. It felt as though I could have skimmed through many of the center chapters, if not skipped them entirely, and I wouldn’t have missed out on much. Now, it may be that Meyer is setting things up for the sequels, but I prefer that the books are more self-contained. In other words, it may have been more of a personal preference beef than a critique on the series that Meyer wrote.

So, I wouldn’t consider it a must read, and I wouldn’t necessarily recommend it over some of the books I’ve read this year. Books such as Fluency, Resurrection, Uncommon Stock and Sand should be on your list first. And if you’re in the mood for some 80’s nostalgia and pop-culture references, then I’d recommend you pick-up Ernest Cline’s Ready Player One before embarking on Off to Be the Wizard.

1 thought on “Book review: Off to Be the Wizard”