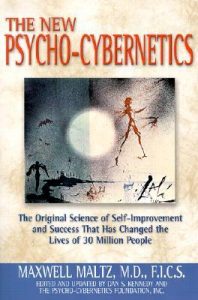 It’s rare to find books that stand the test of time, especially as it applies to personal development, self-help and psychological theory. So many of these books are written based on the trend of the day in an attempt to ride the wave to making a quick buck. Even rarer is finding a personal development book that you know you will come back to on a regular basis.  As the saying goes, these are even fewer and farther between.

Fortunately, I discovered a book that fits these qualities – The New Psycho-Cybernetics by Dr. Maxwell Maltz.

I’m not exactly sure how I happened across Maltz’s work, but I’m glad I did. “Game-changer” can be such an overused and over-hyped word, but it applies in this case. In other words, reading The New Psycho-Cybernetics has had a profound outlook on my approach to life. It is what I would call a foundation book in the realm of personal development. It revealss the science behind how we can employ basic techniques to control our brain and inner voices to get the most out of life. Since reading it, I’ve noticed that many of the concepts discussed are referenced and built upon in other popular personal development books. For these reasons alone, it is a book that I plan to refer back to on a regular basis.

I first read the book back near the end of 2011. It was a difficult time for me personally as my business was going through a rough patch. My co-founder had decided to leave the company, and it was unclear if the business would survive the next year, if not the next few months. Using the concepts in Maltz’s book helped me to focus my energy on the possibilities and opportunities available to the business rather than focusing on the negatives and impending doom. I built a vision of where I wanted the company to be and kept the business alive through 2012. By the middle of 2013, I had moved the business from Orange County closer to my home, rebuilt the team, and added key clients, all of which remain a part of the business today. I’m not certain that I would have made it through that difficult time without the concepts, exercises, motivational messages and stories contained in Psycho-Cybernetics.

As a bit of background, Dr. Maltz was a plastic surgeon by trade, not a motivational speaker. However, what he discovered during his time as a plastic surgeon was that most people who claimed they needed plastic surgery to improve their life were not being held back by their physical appearance. It was their mental image of themselves and how they believed others perceived them that was the problem. In some cases, Dr. Maltz was able to convince patients to forgo plastic surgery and have them achieve success in their life by simply changing their mental perception of themselves. His first-hand experience with his patients led him to discover and develop the concepts and exercises behind Psycho-Cybernetics. While some would label his work as positive psychology, or positive thinking, Psycho-Cybernetics is more than that. He reveals the science behind how the methods work to change one’s attitude and outlook on life.

I’ve always held a firm belief that we’ve only scratched the surface of the power of the human brain. We are only aware of what our conscience minds are doing, but is our sub-conscience that is really directing things. So much of what happens around us is controlled through our sub-conscience. It’s hard to explain until you recognize that our inner thoughts (or inner voice) somehow, almost magically, influence and affect the people and events around us. I don’t believe this is some supernatural phenomena, which is what makes Psycho-Cybernetics so powerful. Dr. Maltz discusses how these process work in the brain and how you can tap into theis “hidden” power to make them work for you.

Perhaps most important, Psycho-Cybernetics is an “action manual”. As described at the end of the book:

Unlike philosophical writings and unlike scores of other self-improvement books, Psycho-Cybernetics emphasizes things to do, not just things to think. This is important, because it is the constructive doing that yields results.

In other words, sitting around and visualizing success is not the answer, but it is part of an overall action plan that will lead you toward success. The final passage in the book says it all:

Psycho-Cybernetics can be of little value if only read, then relegated to a book shelf. But if used with purpose and direction and determination…, it can liberate you to live a most fulfilling life.

My goal is to revisit Psycho-Cybernetics on an annual basis. As you might expect, I would urge you to put it on your Must Read list, especially if you are interested in discovering the keys that will help you maximize your potential.