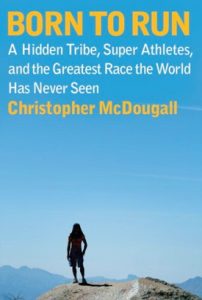 I’m not a runner. My entire running career consists of my one and only 10K (which I completed in just under 50 minutes by the way). So it would seem odd that I would read a book about running.

On the other hand, friends are one of the recommendation sources for my reading list. In fact, out of all my sources, friends are my favorite, even more than my nemesis – the Amazon recommendation engine. The reason is pretty obvious. My friends and I share many of the same interests.

Therefore, it really isn’t much of a surprise that I ended up reading Born to Run by Christopher McDougall. It was recommended to me by Steve Hudson, a good friend of mine who has been a good source of book recommendations. We’ve been sharing our experiences related to food, diet, and fitness. During one of our discussions, he suggested I read McDougall’s book.  While he’s more of a runner than I am, he still felt that I would enjoy it.

The book is written as a documentary. It is the story of Christopher McDougall’s quest to discover the secrets of the Tarahumara Indians. You see, McDougall is a runner, one that suffers from chronic injuries as most runners do. He heard about a tribe of indigenous people who lived in Northern Mexico who are known for their running prowess. They are able to run distances of over 100 miles at a time without the use of modern technology and accoutrements used by modern marathoners. They’re clothing consists of traditional loose fitting, flowing robes. Their shoes are simple pieces of hardened rubber strapped to their feet. They don’t use gel inserts or specially designed shoes. McDougall wanted to understand how they could cover these large distances without modern amenities.

The book contains three threads within it. One is the story of McDougall’s desire to meet the Tarahumara. It’s a story that runs throughout the book, and one which is highly entertaining. There’s the search for Caballo Blanco. The crazy antics of Jenn and Billy and their unorthodox ultra-marathon preparation techniques (or lack thereof). There’s barefoot Ted, who is a character unto himself. And then there are the Tarahumara Indians, who are the centerpiece of the plot. You can remove the other two threads, and this story could easily stand on its own.

The second thread is about the science behind running. McDougall does a lot of scientific research to show how humans were built to run. He covers anatomy and biological concepts which show how humans are able to cover and run long distances better than any other mammal. He also shows how our endurance has been a key to the survival of the human race. Our endurance is not only useful in outrunning predators but also key for tracking down food sources. He gives examples of modern day tribes that still use endurance to capture their prey.

The third thread questions the tactics of companies in the fitness industry, particularly shoe companies. It questions whether or not the products they are creating are really helping us. These products are supposedly based on sound scientific research and technological advances, yet the rate of injuries among runners continue to rise. It makes one question the motives of these companies. Are they really trying to help us with these technological advanced shoes, or are the products simply a vehicle to generate ever increasing profits? It’s very interesting to see McDougall explain how shoes work, and how running barefoot and using minimalist shoes may actually be better for us. It certainly made me (further) question the marketing-based culture that surrounds us these days. I’ll leave it at that and let you form your own opinions after reading the book.

Finally, I enjoyed how McDougall covered the zen aspect of running. Much like golf, which I love, there is a certain metaphysical part to the sport which you don’t understand unless you participate in it. McDougall does a great job describing this ‘hidden’ side to running.

Born to Run is a great book, and one worth reading. It’s a Must Read in my opinion. Regardless of whether or not you like to run, it’s a great story told by a great storyteller. It teaches and entertains at the same time, which is the best kind of documentary. I never thought I’d enjoy a book about running, but the book is extremely well written. It has a great anchor story, flashbacks to historical running events, and secondary threads that cover the science of running, fitness, anatomy, biology, and more. I’m looking forward to reading the next fitness related book that Steve recommended, which is McDougall’s Natural Born Heroes.

On a personal note, I’m way, way behind in journaling this year. There are an additional 10 books which I’ve finished so far this year that are queued up for posts. In this list are quite a few excellent books, so I’m hoping that I will be able to get caught up over the next couple of months and share those books which I would highly recommend you put on your 2018 reading list.