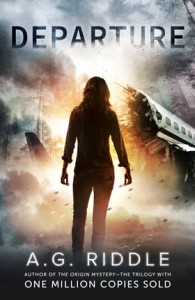 One of the criteria I used to build my 2015 reading list was selecting books by authors I’d previously read and liked. Since I enjoyed the Origin Mystery Series by A.G. Riddle (all three books in the series made my Must Read list), adding Departure to my 2015 reading list was a no-brainer. I also liked that the book was stand-alone and not part of another series or trilogy.

Departure begins with the crash of a jet that is travelling from New York City to London. The jet crashes in the English countryside, and the survivors are forced to fend for themselves while waiting for a rescue team to arrive. Unfortunately, a rescue team never appears, and the survivors are forced to figure out on their own what has happened and why they’ve been left on their own.

I’m not going to expand on the plot any more than that – doing so would give away the key pieces to the story. As with the Origin Mystery Series, Riddle keeps the story moving with plenty of action and keeps you guessing. He also manages to mix in a healthy dose of science fiction and does it in a way that makes it very believable. I found myself re-reading passages of the book to digest the “fictional” science that he presented. Some of it sounded very plausible, and I had to convince myself afterwards that it was just a work of fiction. Bottom line, I found the science fiction technology Riddle presented to be mind-blowing. It was an aspect of the book that I really enjoyed.

If you liked the Origin Mystery Series as much as I did, then you’re certainly going to like Departure. There are a lot of similarities between the two works, but there is enough differences to make Departure special in its own right. While I wouldn’t go so far as to say Riddle topped his debut effort, he definitely matched it. The book has an excellent plot, it’s very well written, the characters are great, and the science fiction is well developed and plays an integral part in the outcome of the story.

I’ve added Departure to my list of Must Reads. I strongly recommend it, and I’m looking forward to what A.G. Riddle has in store next.