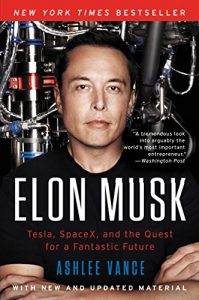 Back in early 2015, I watched the documentary series, “The Men Who Built America”. It was inspiring to watch how industrialists such as Vanderbilt, Rockefeller, Carnegie, and Ford transformed America during the late 19th and early 20th century. While it can be debated how much came at the expense of the lower and middle classes, the fact remains that their ideas and the businesses they created had a profound impact felt around the world.

On the whole, I am rather disappointed with the innovation in our current generation. Too much energy and money is spent chasing the latest “quick buck” ideas rather than exceptional breakthroughs. Fortunately, there are two clear exceptions in my opinion – Jeff Bezos and Elon Musk.

I enjoy following and learning about how they have pursued their passions and built companies around their visions. One of my favorite books from 2015 was “The Everything Store” by Brad Stone. It was a fascinating tale of how Jeff Bezos conceived and built Amazon. When I saw that a similar book had been written about Elon Musk, I knew I had to read it.

“Elon Musk: Tesla, SpaceX, and the Quest for a Fantastic Future” by Ashlee Vance recounts Musk’s life from his childhood, through his teen and college years, through companies he successfully started as a young adult, through his time at PayPal, to his current ventures with Tesla and SpaceX. The book explains a lot about Musk’s personality and what makes him tick. It also goes a long way to showing how determined he is to achieve his vision, at all costs.

What I find most impressive is the grand nature of Musk’s ideas. He’s not talking about creating an app, building a website, or making a simple piece of hardware. In the case of SpaceX, it’s about putting people on Mars. In relation to Tesla, it’s about transforming the auto industry and reducing our reliance on fossil fuels. With Solar City, it’s about creating a power infrastructure that will enable us to reliably use renewable energy. Even more impressive is that Musk is constantly coming up with new ideas, such as Hyperloop, and finding ways to implement them.

Even more impressive is that he just doesn’t talk and pontificate about his ideas. He does something about them. That’s what makes the book so interesting. It shows how Musk couples his vision with passion and determination to make things happen. Vance does a great job of showing how he has done it with ideas he has had throughout his life, even showing how he has applied that same drive to his personal life.

While the book certainly highlights the positives of his work and personality, it does not paint his as a saint. It shows how difficult he can be to work with, and even harder to work for. It provides examples of how his determination to achieve his visions has come at a significant personal cost to those around him, as well as himself.

No matter his faults, people are still attracted to him and want to work on his projects. It’s the enormity and potential to make a difference that make people want to participate in his missions. His drive, his passion, and his vision allow people to see past the negatives and do whatever it takes to succeed. And thus far, they have done so in spades with SpaceX, Tesla, and Solar City.

The book came highly recommended via Brad Feld’s blog (as an aside, I’ve gotten many excellent book recommendations via his blog and would encourage you to follow it). I would concur and highly recommend the book and have put it into my Must Read category of books. It hits quite a few key points for me – it came highly recommended, it’s a third party account of a significant entrepreneur, and it’s very well written. I would put it right up there with the Everything Store and Hatching Twitter, which are two of my other favorite recounts of startups and entrepreneurial figures.

In closing, what Musk is working on is transformative – much like the industrialists of the late 19th and early 20th century. He’s one of those unique individuals who has more than a big vision of the future. He has the courage to make it happen. When he runs into problems, he doesn’t see them as obstacles. He views them as opportunities to advance technology, make breakthroughs, and achieve ever higher levels of success.

Along with Musk, I see him and Jeff Bezos as two individuals in my generation who have the passions and vision to make things happen. They have the drive, determination, and desire to make their mark and leave the world a better place. I, for one, am looking forward to the outcomes of their many projects.

2 thoughts on “Book review: Elon Musk – Tesla, SpaceX, and the Quest for a Fantastic Future”