When you work in the technology space like I do, reality gets distorted. It’s easy to forget that people outside the industry don’t understand what goes on behind the scenes in the software, websites, and mobile apps they use. For example, I’m careful, some may even say paranoid, about how much information I share on social media, if any at all.

Why the paranoia? I don’t trust that any of those companies have our personal privacy and best interests at heart. As the old saying goes, if you’re not paying for the product, then you are the product.

Because I work in this echo chamber, I find it interesting when a person outside the industry shares their perspective on what goes on inside of it. That’s why I chose to read Uncanny Valley by Anna Wiener.

END_OF_DOCUMENT_TOKEN_TO_BE_REPLACED

In case you haven’t noticed, the big tech companies continue to grow in power. That growth is allowing them to not only generate massive amounts of wealth for investors but also shape society. When I say big tech, I’m not just referring to the public companies that make up what is known as the FAANG group of stocks that includes Facebook, Apple, Amazon, Netflix, Google, and of which I would also include Microsoft. My definition of big tech also includes privately held companies known as “unicorns”, companies that have rapidly went from zero to $1,000,000,000 valuations such as Nextdoor, Udemy, Instacart, SpaceX, Stripe, and the like.

As someone who works in technology, it’s great to see companies in this space have success. However, that success has not come without controversy. The more we learn about how these companies operate, how they make money, and how they exploit their users, the more we should be concerned about the impact they have on the world around us. It’s a multi-faceted problem that Maëlle Gavet explores in her book Trampled by Unicorns: Big Tech’s Empathy Problem And How To Fix It.

END_OF_DOCUMENT_TOKEN_TO_BE_REPLACED

Starting a company is hard. Having been there, and still going through the process, I sometimes wonder why anyone would want to do it. People will question your decisions and doubt you. Customers will reject your product and your ideas. There are long hours working day and night for little pay. Your life is turned into a roller coaster of ups and downs. It’s challenging, to say the least.

However, when things are clicking, there can be nothing like it. Building a product that solves a problem, satisfying customers’ needs, and creating value make it all worth while. These are the things that keep you coming back for more. They’re the goals every entrepreneur strives for. But achieving these goals is not easy, and sustaining them is a near impossible challenge.

So why on earth would anyone ever want to “do” a startup?

END_OF_DOCUMENT_TOKEN_TO_BE_REPLACED

I set a goal five years ago to blog regularly about my day job running a software company. I setup the Startup Lessons category and managed a handful of posts that year before things stalled. Since then, most of my Startup Lessons have been about related books or riffs on interesting posts.

So after a lengthy hiatus, I’ve decided to reboot Startup Lessons. My (new) goal is to write at least one post a month sharing what I’ve learned running a business over the past 15 years.

END_OF_DOCUMENT_TOKEN_TO_BE_REPLACED

No, this isn’t a book review about gambling. although it tends to be the way most companies price their product, especially when the product is software. Why is that?

Pricing a software product is a difficult, challenging task. The problem is that the cost of software doesn’t lie in making another copy. The marginal cost to make an additional unit is effectively zero. The internet has eliminated the cost of distributing it. So if production and distribution are free, what makes software so expensive?

It’s the cost of the people required to develop, market, and sell it. These elements add up quickly and can get very expensive.

In Don’t Just Roll the Dice, Neil Davidson addresses the difficulties pricing software. And as the subtitle states, it is a ‘usefully short guide to software pricing,’ with the operative words being short and software.

END_OF_DOCUMENT_TOKEN_TO_BE_REPLACED

Most business books tend to be dry and boring. An author introduces a framework or set of concepts. These are explored in detail. Theoretical examples of how to apply them are given. Every once in a while, I’ll come across a business book in this format that is well written and reads easily. For the most part though, these books are a slog and take me a long time to read.

The business books I like are those that weave the framework or concepts into a story. They are easier to read and entertain at the same time. While I may not be able to apply or use the concepts presented, more often than not, I read through this style of business book faster. It feels a lot less like work and is way more enjoyable.

My latest business read, Get A Grip: An Entrepreneurial Fable by Gino Wickman and Mike Paton, uses the story-telling style to introduce their Entrepreneurial Operating System framework, or EOS for short.

END_OF_DOCUMENT_TOKEN_TO_BE_REPLACED

Last month’s delay of the WeWork IPO and the subsequent turmoil around the company got me thinking about the startup scene again. There seems to be a never-ending supply of capital available to promising startups. We’re seeing public market exits for companies Uber, Lyft, Slack, Peloton, Pinterest, and Zoom in the billions of dollars. On the surface, it would appear that we are in a golden age for startups.

END_OF_DOCUMENT_TOKEN_TO_BE_REPLACED 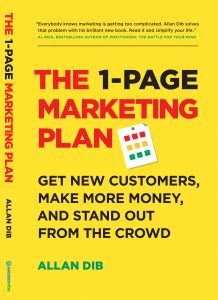 There aren’t a lot of books available that apply to small business owners. Most business books focus on theoretical concepts that apply to bigger businesses and corporations. The techniques and principles are complex, require large teams and specialized resources, and may even require complex tools or software to implement. They don’t take into account the limited time and budget a small business owner has.

When you’re running a small business or just starting out, it’s the simple things that are important. As the business owner or CEO, you need to stay focused on the marketing of your product(s) and service(s) in order to generate the sales to maintain and grow it. Usually, you don’t need a lot of time, money, or resources to effectively market your business. What you need is discipline, perseverance, and a well thought out plan. Fortunately, I was introduced to a book recently that fits these requirements perfectly, the The 1-Page Marketing Plan by Allan Dib.

END_OF_DOCUMENT_TOKEN_TO_BE_REPLACED

One of the better habits I’ve developed over the last couple of years is setting aside 10-20 minutes in the morning to read. The books I read during this time are geared toward personal development. They are about business, leadership, personal growth, and related topics. As someone told me a few years ago, if you’re able to read 10-15 pages a day, you end up completing a book every month. Over the last two years, I’ve read over 25 books this way.

It shouldn’t be much of a surprise that Start With Why by Simon Sinek ended up as one of my morning reads. It was recommended through Sean Murphy’s blog that I follow, SKMurphy. The book’s also highly rated and has received plenty of positive press since it’s release in 2009. Given the short shelf life of most business books, part of my curiosity was to see if the ideas in the book were still relevant almost 10 years later.

END_OF_DOCUMENT_TOKEN_TO_BE_REPLACED

Running a technology business, I’m always on the lookout for ways to tweak or improve processes, particularly around new product development. As a smaller company, resources are valuable and precious. Chasing a new product that doesn’t pan out can have dire consequences for the business. You want every advantage you can get screening product ideas and determining product-market fit.

We’d implemented agile methodologies in our development workflows, but these concepts have more of an impact on scheduling and getting product releases completed. They have minimal, if any impact on what product or features should be built. If what is getting put into the top of the development funnel isn’t a viable product, it doesn’t matter how fast or how good the product is that comes out the other side. You need to have a good methodology in place for building the right stuff.

For suggestions in this area, I turned to Sprint – How to Solve Big Problems and Test New Ideas in Just Five Days by Jake Knapp. I wanted to get ideas and gather insight into evaluating and fine-tuning new product ideas.